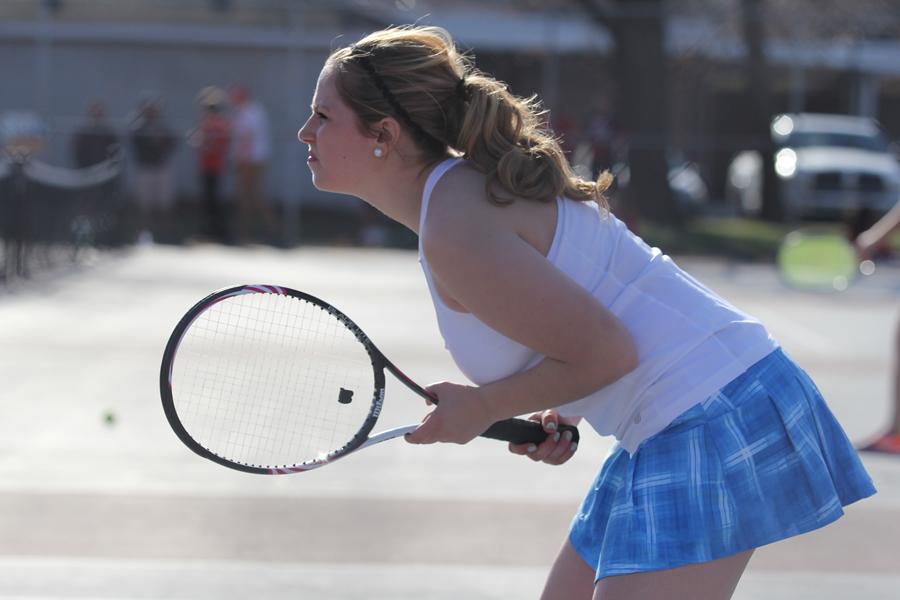 Emily Birlson (11) stays focused as her partner, Sarah Dingman (11) serves. Birlson has played on the tennis team all three years of her high school career.

With every sports team, a special bond grows as the season progresses. For the girls tennis team, that bond has been created and strengthened before the first match of the season.

“We do a lot of team bonding. We have ‘families’ of three or four people that we do special things for so everyone gets personal support. We also have gone out to breakfast after Saturday practice and before our match on Friday the team went out to Buffalo Wild Wings,” Elayne Wisniewski (11) said.

On Friday, April 11, the team played Hammond Morton. Varsity scraped up a win 3-2 with only 2 Singles and 1 Doubles losing matches. The JV team won 5-0, not giving up a single game. During the matches, the girls not playing sat behind the courts and cheered on their teammates.

“I think the bonding helps people do better and they help support each other more and then those that are being supported feel better about themselves. Cheering can completely change a match. If your teammates are behind you and support you, they can help you stay positive. They motivate you to win and to play your best even when you’re feeling down on yourself,” Elena Eickleberry (11) said.

Before every match, the ‘families’ write good luck cards to one another. They are also making shirts for their families and on occasion give goodie bags. On Sunday, the team also held their first pasta party of the season. The team will play East Chicago on Wednesday, April 16, Highland on Friday, April 17, and the varsity team will play in a tournament in Hobart on Saturday April 18.

“We’re closer, we get along better. We play better because we don’t fall into cliques when we warm up. Instead we warm up with people of about the same skill level since both inside and outside of practice we spend more time with people that aren’t necessarily our closest friends so there’s less decisions being made on friendships and more being made on what is going to be best for each of the players,” Jory Swider (12) said.