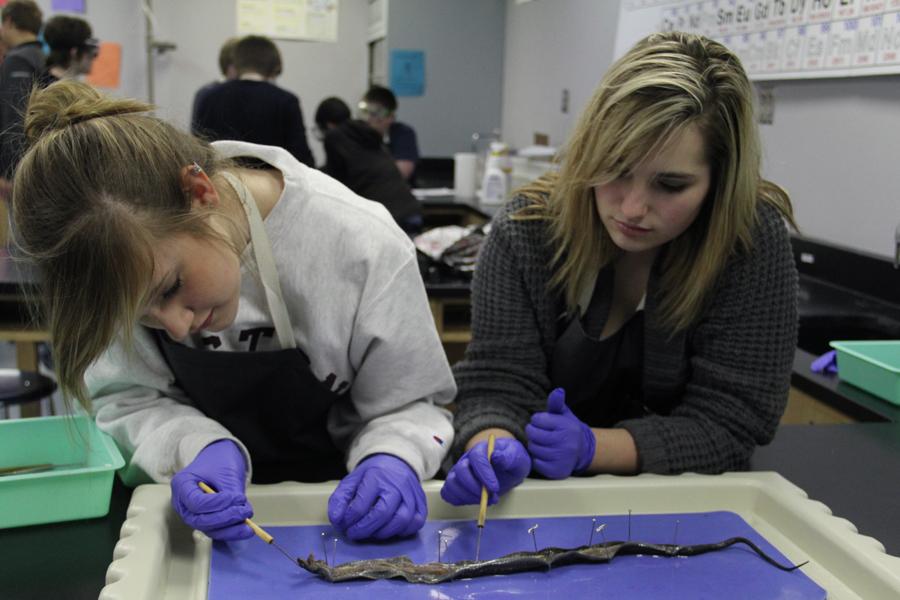 Rachel Yorek (10) and Taylor Jackson (10) explore the inside of the snake after making incisions. They learned about why the organs are located where they are in the snake.

Mrs. Lisa Moreno’s, Science, fourth period zoology class performed a snake dissection to get a hands-on education about the reptiles unit. The students were asked to cut the snake open and identify various parts of the body on April 17.

“[I wanted the students] to look at a snake up close and see that a snake’s organs go in a line, like cars on a train, because of its narrow body,” Mrs. Moreno said.

The class was asked identify the parts of the snake. They had a list of body parts to find, and they looked for the major organs.

“We just did amphibians with the frog. We finally got a grant to get the snakes,” Haley Moore (10) said.

Students learned about the anatomy of the snake and how it adapts and lives in its environment. Some students were disgusted by the snake while others confidently dissected it.

“I took [this class] for my future career. Nothing really grosses me out. I think [dissections] are cool. You learn a lot,” Moore said.