Boys track wins some, loses some 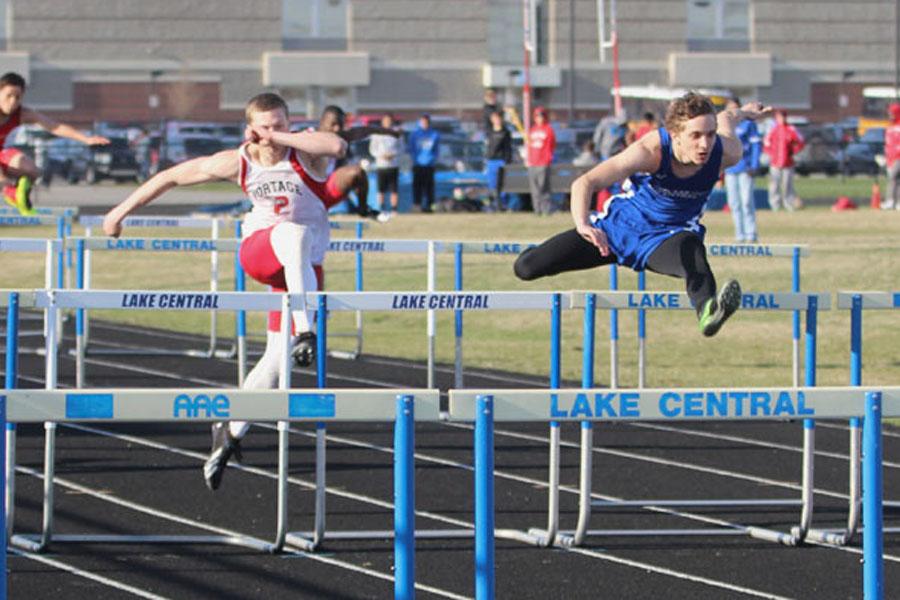 Kyle West (11) runs the 100-meter hurdles and comes in first place. The team ended up winning against Portage, but losing to Crown Point by two points.

Amidst the bitter wind gusts on Wednesday, April 16, an even more bitter face-off in boys track and field took place at Clark Middle School against both Portage and Crown Point. The Indians managed to steal the win against Portage 68-64, but fell short to Crown Point with a score of 67-65.

“Crown Point is ranked No. 1 in the area, Portage is ranked number three and we’re ranked sixth or seventh, depending on what poll you look at. We beat Portage and we almost beat Crown Point; we were within two points of Crown Point. I think it’s a step in the right direction and I think that was very significant for us to come out and have a good showing against those two really good teams,” Head Coach Jeff Rhody said.

With such a young team and such a close final score, the athletes hold the potential for further advancement. Although the events in track and field are many, every possible point opportunity is valuable.

“Our field events are huge when it comes to points, as far as our strengths concern. One of our strengths is also a weakness. We’re young but we’re experienced so as these athletes progress I think we’re going to do some really big things. We’re a work in progress; we’re a young team so guys are figuring out what they need to do. The winter was terrible so training for us was awful, so we’re just getting into the ability to really train well right now,” Mr. Rhody said.

Even though LC did not emerge victorious against both teams, there were still note-worthy races during the meet where the boys in blue trumped their two opponents in red.

“Our [4×100 meter] relay [Ethan Gomez (11), Charles Sykes (11), Shane Smelser (11) and Kenneth Singleton Jr. (11)] did really well and last year [in our relay] we lost to both Portage and Crown Point. This year we beat both of the teams so I think our relay team has a chance of making it to State this year,” Gomez said.

The boys’ next meet will yet again take place at Clark Middle School tonight, April 22, at 4:30 p.m. against Michigan City.