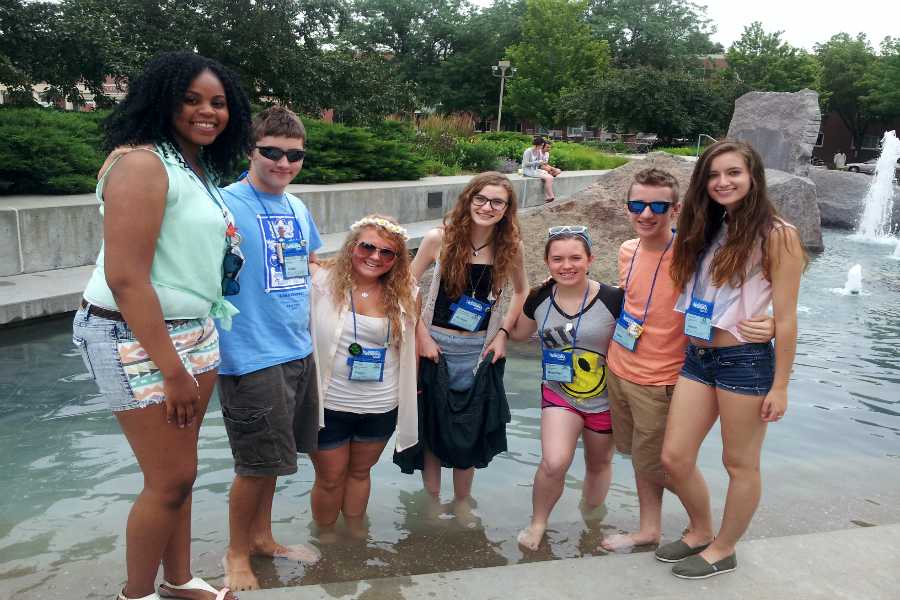 Raquel Rembert (11), Aidan McCambridge (12), Paige Kruk (‘14), Nichole Heusmann (11), Brandilyn Stockton-Fresso (12), Adam Gustas (10), and Lauren Granskog (11) on campus at the University of Lincoln Nebraska for the International Thespian Conference. After practicing “Drum Taps” for nine months, this was the first group from Lake Central to perform at an international level.

From the competition show’s first meeting to its last performance, “Drum Taps” has been a year-round project. On Friday, June 27, Mr. Ray Palasz, English, and seven other students performed at the International Thespian Conference in Lincoln, Neb. After nine months of practicing, they didn’t stop beating their drums until the final curtain call.

“We performed ‘Drum Taps’ and with every performance there will always be hiccups. Add a new actor into the mix and it creates a whole new atmosphere for the other actors to get used to. We did, in fact, have some hiccups and line problems that were scary, but like any well-educated performer, we covered them up and went on with the show,” Nichole Heusmann (11) said.

At first, “Drum Taps” was chosen as the runner-up Chapter Select show for Internationals. When the show that was supposed to perform dropped out, Lake Central Theater Company was granted the opportunity to go and represent not only Lake Central, but the state of Indiana.

“The stage at Internationals was actually smaller than the [Lake Central] stage, and this show only had four people in it. Most shows I’ve been in have had at least twenty people, so I got closer with the cast,” Adam Gustas (10) said.

When the show must go on and the focus is on memorizing lines and perfecting characters, the end is a fleeting thought until it is over, but when it does come, it hits hard.

“‘Drum Taps’ is Walt Whitman poetry that wasn’t meant to be performed. It’s about war lessons that would be taught to you, how you can be really excited about war, but then realize all the horrible things. Your head kind of spins a little, and you realize that you want it to end. One of the poems is ‘Spirit Whose Work is Done’ and after doing ‘Drum Taps’ for nine months, that poem made us realize that we’re done with the show,” Raquel Rembert (11) said.

Although Lake Central has sent thespians to Nebraska for Internationals before, this was the first group from Lake Central to perform at that level.

“Everything was worth it for the experience. It was an experience I will never forget or probably experience again for that matter. Everyone jokes around about the nine months we have been doing this performance, saying we have had a baby. It’s true. We have gone through almost all the same symptoms as a pregnant woman with all the nausea, the mood swings, everything. I loved being able to do a show with my closest friends and being able to get closer to others in the process,” Heusmann said.