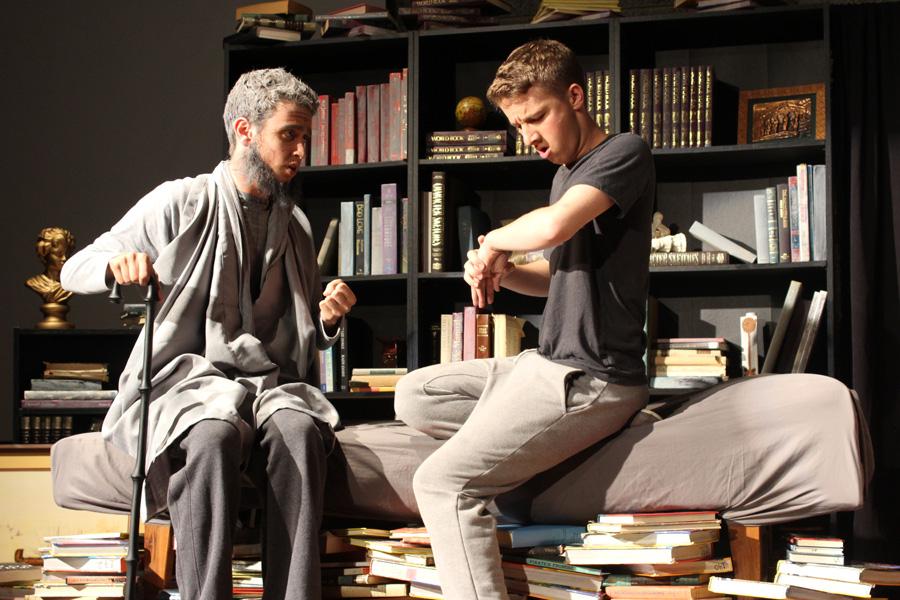 Jonas, Adam Gustas (10), reels back after The Giver, Nicholas Kiepura (12), shares with him the memory of sunburn. “The Giver” by Lois Lowry took place in a society in which things like pain, warfare and art became practically nonexistent.

In 1993, Lois Lowry wrote “The Giver.” Twenty-one years later, her story is still being read by thousands of children. For this year’s summer production, members of the Lake Central Theater Company and community came together to give life to this classic tale.

“I knew the plotline a lot better [because I had read the book] and it made me kind of laugh because [the book and the play] are literally replicas,” Megan Barry (11) said.

“The Giver” is set in what seems to be the perfect utopia. Everyone is an equal and everything is the same. However, many everyday things have been eradicated to keep this pristine community: ideas of war, love and even animals.

The story follows Jonas, played by Adam Gustas (10), who is chosen to be the next Receiver of Memories. In order to take this task on, he must seek out the Giver of Memories, played by Kiepura, who is the only person who has knowledge of all things.

“A lot of practicing lines [prepared me for this role]. There is a lot of dialogue between Jonas and I, so it is very important that we are in sync with our lines. Practicing lines also makes me more comfortable with what I am doing, so if I know my lines well, I can focus more on my non-verbal acting,” Kiepura said.

The company was left without an official stage to perform on after the demolition of the auditorium, so they were left with no choice but to use the LGI room. Although the LGI was used for Freshman Shows earlier this year, this is the first full production that will be staged there.

“There have been so many difficulties. There isn’t enough light onstage, there’s a small backstage, little seating, don’t even mention the size of the stage. Although it’s tough, we’ve done a good job despite the difficulties,” Barry said.

“The Giver” runs from July 10-12 at 7 p.m., with a 2 p.m. show on Sunday, July 13. Spectators should enter the building through door E and follow the signs posted for directions to the LGI room. Tickets are $5 each and Lake Central staff members are free with their ID.