ALS no longer left in the cold 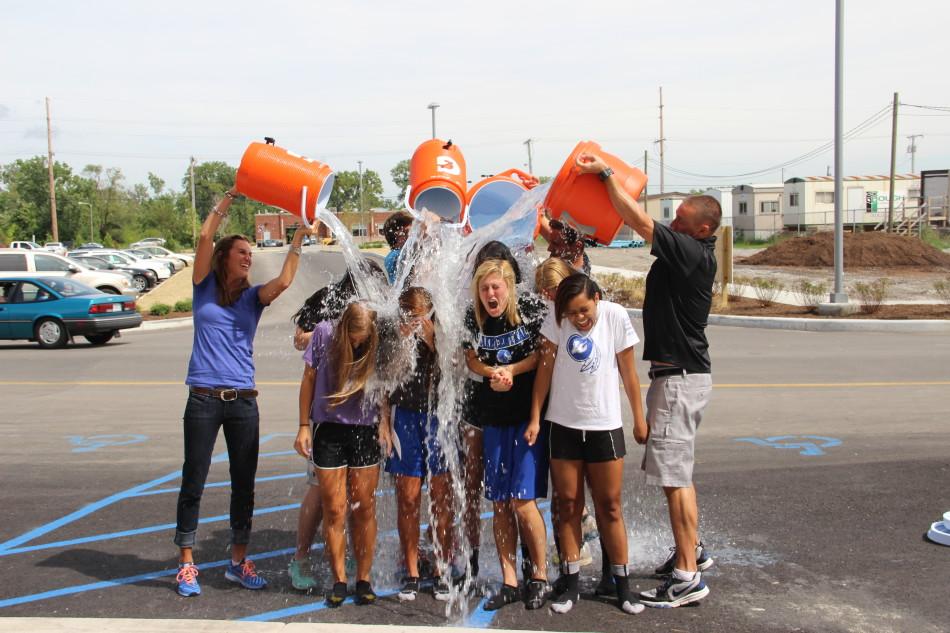 Ice Water gets dumped down the Lady Indians’ backs. The completed the ALS ice bucket challenge on Friday, Aug. 22 after school.

The ALS (Amyotrophic Lateral Sclerosis, a brain and spinal cord disease) ice bucket challenge has taken the world by storm.The goal is to complete the challenge, dumping a bucket of water on one’s head, within 24 hours and donate. If the challenge is not completed, one must donate $100. Once the challenge is completed, a video must be posted and three more people are nominated.

The movement started because Pete Frates, baseball captain from Boston College, was diagnosed at 27 in March 2012. A month ago, Frates’s friend started the Ice Bucket Challenge asking people to dump a bucket of ice water on their heads to bring attention to the disease. Unable to do the challenge, Frates asked friends on Facebook to complete the challenge. August 14, Frates took the challenge on Fenway Field. From there the challenge spread across the U.S. with Lake Central standing out on the map.

“I was told that I was nominated Saturday or Sunday last week. I was going to do it the next day but then Josh Barajas [(12)[, the person who nominated me, said, ‘Actually I’d rather see you do it in front of everyone Friday at the football game,’” Colin Chenoweth (12) said.

The ice bucket challenge went viral within a week.

Spreading awareness was the main goal of the challenge. It is said that no one understands the agony that deals with ALS unless they have experienced it on a first hand basis.

“I can actually relate to the ALS ice bucket challenge quite a bit. One of my childhood friend’s mom was diagnosed with ALS my freshman year. It is terrible for everyone who has it and everyone who it affects. I really think getting word out and getting money donated is a great thing for this cause,” Chenoweth said.