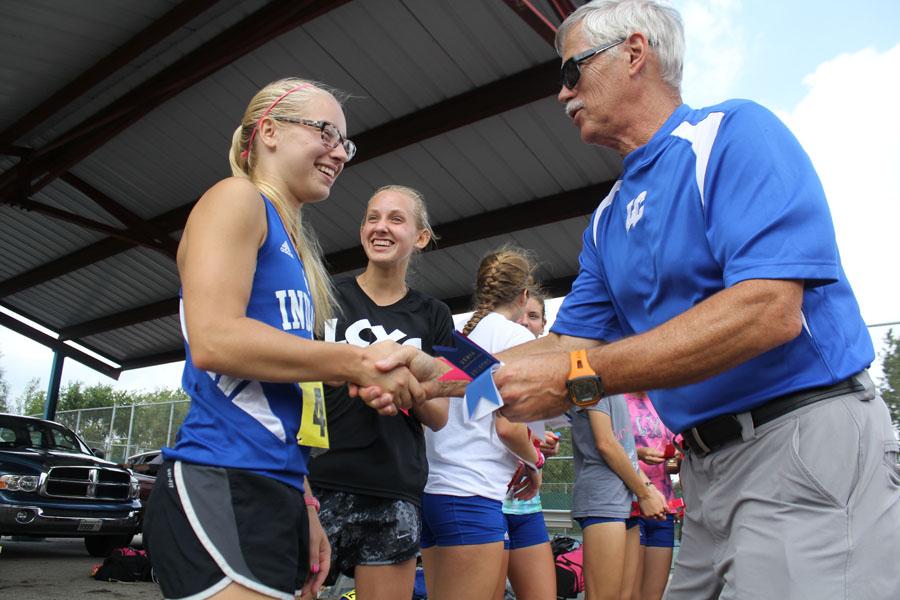 The focus of the first cross country meet of the season was not just on the finish line. The boys and girls conquered the course for someone very dear to the cross country family.

“Last year was the first year of the Rudy Skorupa Invitational. He coached for a really long time. So, we have this invitational now to kind of commemorate his coaching here,” Josie Polaski (12) said.

Rudy Skorupa, former boys cross country coach and teacher at Lake Central, was able to attend this second annual race in honor of the work he put into coaching over the past decades.

“I coached for 40 years. [I miss] certain aspects [of coaching], like the days when you go to the meets and the kids have been training and you want them to go out there and do well.  Of course you miss also the commrodorie you had with the other cross country coaches. As a group, I think cross country coaches seem to get along very well and they all help eachother out. You miss that aspect of it a lot, too,” Mr. Rudy Skorupa, former boys cross country coach, said.

The boys cross country team did not have to search far for a new cross country coach. Two years ago when Skorupa retired, Mr. Jeff Rhody, science, filled in his position as head coach.

“Nobody can ever take [Mr. Skorupa’s] place. He was a mentor for me for so many years. For 15 years I was his assistant on the track, the cross country course and the classroom. It’s special just to have him come back,” Rhody said.

The dynamic duo has split, but Skorupa is confident that his legacy will live on through Rhody’s coaching.

“With the running experience that he had from his high school, he probably contributed as much to the program as I did,” Skorupa said.

The current seniors on the boys team were the last to be coached by Skorupa before he retired.

“He was my coach for two years before this. It is pretty cool to run a race commemorating him. In the past, he’s been a pretty good coach, and he was a good runner,” Brandon Long (12) said.

Skorupa’s coaching not only left an impression on the boys team, but the girls cross country team has been moved by Skorupa as well.

“It is like an honor of him. My family has known him for a while because my uncle used to run with him,” Elizabeth Ayersman (11) said.

Both the boys and girls cross country team fell short of first place. The boys placed second overall not far behind the Munster Mustangs who took first.

“You always hope to win it. But, I was very happy with what the guys did today and where we are in our training right now. I think they ran a really nice race,” Rhody said.

The Valparaiso Vikings snatched first place in the girls varsity race, which placed the lake central girls in second overall. Some of their top runners are still recovering from recent injuries.

“I just got off of a back injury but that is completely fine now. But, I found out that I had low iron, which is really bad for runners so I have been building that back up,” Megan Zajac (12) said.

Obstacles stood in the boys’ way as well during their varsity race.

“ I felt good until I threw up [during the race]. I felt better after I threw up. Right after I threw up, I kind of felt a lot better, but it still slowed me down. I felt maybe like I could have moved up like a place of two if I hadn’t thrown up,” Zach Hupp (11) said.

The Rudy Skorupa Invitational was special for many reasons. For Mitch Polaski (9), this race was special since he is a freshman running the varsity race.

“I was really nervous about it because I did not expect to be like this.It was a really good feeling to be on varsity for the first race,” Mitch Polaski (9) said.

Another special part about the meet was that it was the first meet of the season for lake central, and it was hosted at Lake Central.

“It is our only home meet so it is just a cool thing to be on your own turf and to run here. I think we do [have an advantage] because we know which way to turn, which way to go, where the holes are, and which branches to avoid and not duck,” Jenny Crague (10) said.

Both the boys and girls teams are eager for their next race which is the Harrison Invitational.

[The Harrison Invitational] is a fast course. I didn’t do so well today, and I’m going to kick it in there a lot,” Takoda Potts (11) said.

After the first meet of the season, the cross country teams already have their eyes on the State Championship race which they hope to compete in at the conclusion of their season.