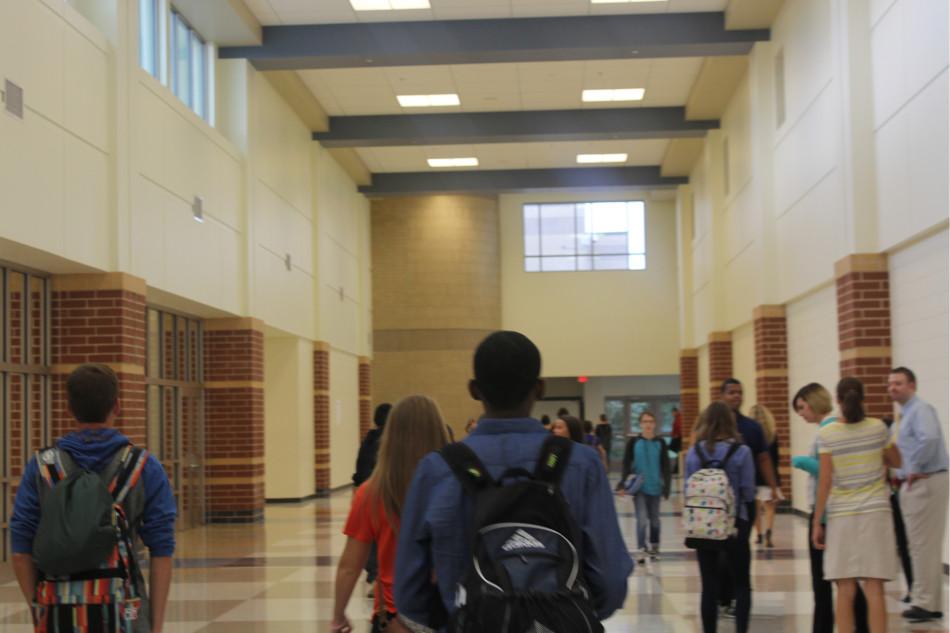 On Aug. 8, 2014, students were awakened early in the morning by the sounds of their alarms and the sight of gloomy skies. As they walked into the school’s doors, they noticed the change in color in the cafeteria and the large glass doors in Main Street. The 2014-15 school year has begun.

This summer, noticeable changes were made to the cafeteria to give it an updated look and hopefully help the flow of student traffic. For instance, floor tiles were replaced, walls were painted, and glass doors that lead directly to Main Street were added.

“I think the new [doors] added to the cafeteria will make getting in and out of the cafeteria a lot easier. Instead of walking across [the cafeteria] to get to my classes, I can just walk out the door,” Spencer Shipman (11) said.

The biggest change was one made by incoming freshmen. Instead of being in the same routine they had been in for the past four years, they had to adapt to a new schedule. Freshmen faced myriad new things, such as block scheduling and a much bigger school.

“I was scared [coming into Lake Central]. It is huge and I actually got lost a couple of times. I am [looking forward to the rest of the year] because at least by then I will know where everything else is,” Destini Briggs (9) said.

Anxiety was high for some freshmen, but many stayed confident in themselves and used the help of older friends or siblings to maneuver their way through the struggles of being in a new environment.

“Honestly, it was an easy transition due to the fact that I had my sister and her friends help me prepare for the upcoming year. I was a little stressed, but I look forward to my upcoming years here,” William Maddy (9) said.

Though some were nervous, others felt a breath of fresh air coming back to school. Seniors especially were eager to get back to finish out their last year of high school.

“Coming into [Lake Central] for my last year felt like a relief. Many were hoping summer would never end, but I was more than happy to start the year. Once I am out of high school, it is the beginning of the rest of my life,” Juliet Johnson (12) said.

The 2014-15 school year opened a new chapter for everyone. Whether students have four more years or one more year ahead of them, new opportunities are created with the start of every new school year.

“High school may not seem like a big deal to many, but it is. I know I will miss all the faces I see and have seen. Good or bad, big or small, everyone here has played a role in my daily life,” Johnson said.