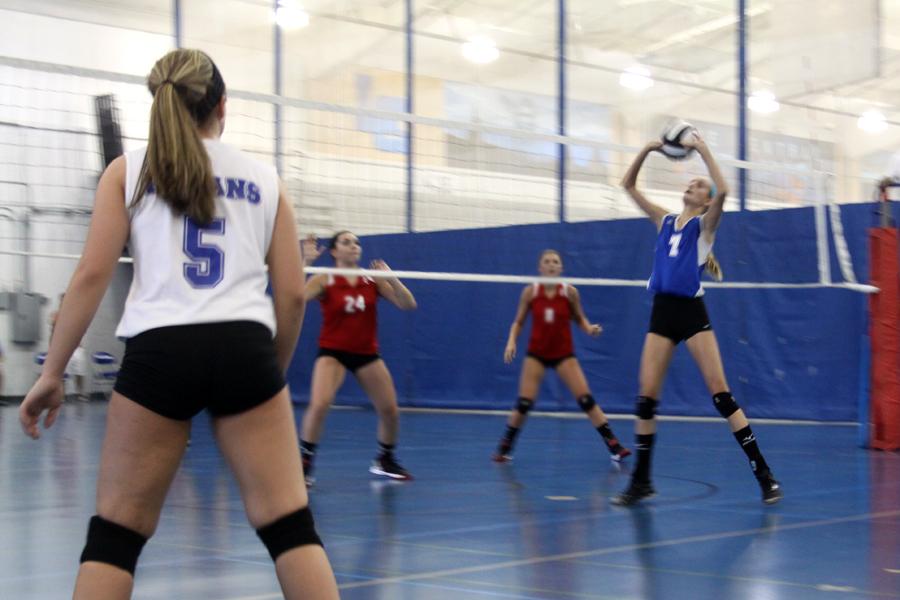 Nicole Dubish (9) sets while Lauren Stearns (9) stays ready for the return. A good set lead to a good spike, and the girls got the point.

On Thursday, Sept. 4, the freshman girls volleyball team faced off with Portage.  With energy and momentum growing during the game, the girls took all three sets with victories of 25-17, 25-24, and 14-7.

“As a team I think we worked really well together and had good communication,” Lauren Stearns (9) said.

“In the second game we lost it a little,” Olivia Rodgers (9) said.

The team kept focusing and communicating.  After a fierce battle, the girls pulled out a one-point win.  With spirits high from two wins, the girls finished strong in the third set.

“In the end we brought up our energy,” Nicole Dubish (9) said.

Every player showcased her talents and efforts.  The result of intense practice was reflected in the team’s performance seen throughout the game.

“We have a lot of work to do,” Coach Jamie Rodgers said. “They will mesh better with more practice.”

The girls’ next home match will take place on Tuesday, Sept. 16. The team will take on LaPorte.