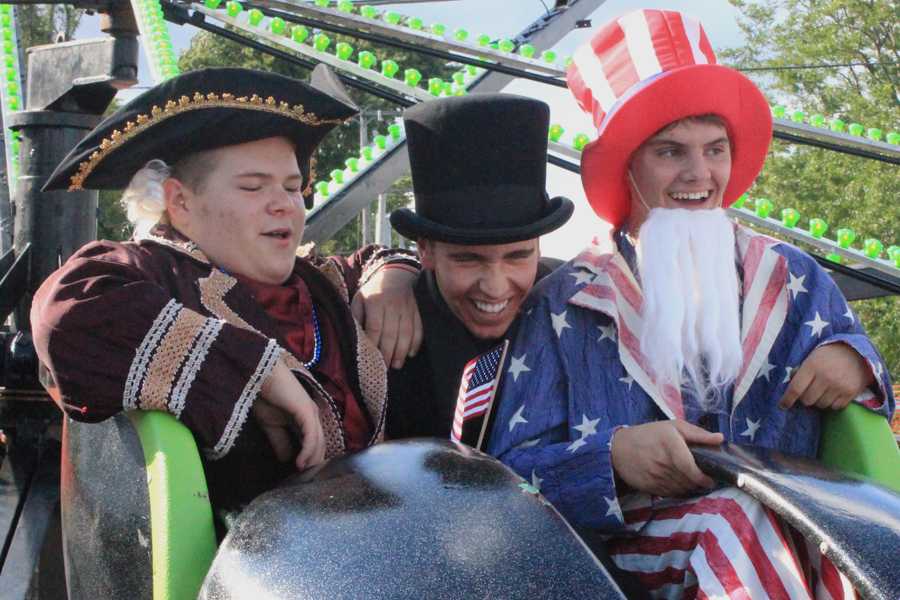 Jackson Delise (11), Brett Balicki (11) and Nicholas Kiepura (12) ride on the new rides at the St. John Festival. They volunteered to dress up as historical figures on the fest's patriotic day.

Festivals are a great way to spend time with family, friends and community. The St. John Fest started on Thursday, July 24 and ended Sunday, July 27. The St. John parish took the festival experience to a new level. People from surrounding towns come to enjoy the atmosphere.

“I have been going to St. John the Evangelist parish for about fifteen years. My favorite part has always been the food. The best part though is the people I am with, they’re the ones that make it fun,” Lake Central student, Emily Birlson (12) said.

The first night of the St. John Fest was Thursday, July 24. Every year the volunteers involved with the fest decide to have a theme night to start off the fest-filled weekend. This year’s theme was “Western”. Robin Vienna, head of entertainment of the festival, contacted Lowell’s DCs Country Junction to start off the evening. Line dance instructor Jeremy McCarty and his team came to the St. John Fest along with the Country Junction band.

“My favorite part about being an instructor is seeing a little kid’s face when they finally get the steps. I would definitely do the fest again,” Jeremy McCarty said.

The children’s games are another activity that attracts families. Ten different games, including the game Hoop Shot, are set up. Win or lose the player will always walk away with a prize.  All the workers in the game booths are volunteers from the St. John Parish.

“I had to get some service hours for school, so I thought working the fest would be fun,” said Grace Rado (7), who attends St. John the Evangelist school.  “I’ve been coming to the fest for as long as I can remember. My favorite part is being able to ride the rides late at night with my friends.”

The St. John Fest is known to have a variety of food from local restaurants. All of the booths had volunteers from the parish run the front counters to collect food tickets, but the elephant ear booth was run by the Knights of Columbus.

“My family, a part of this church for about fifteen years, have been helping out with the St. John Fest for about thirteen years, but this is my first time being a Chairperson. It’s a little more commitment and responsibility, but it’s going good. My favorite part is the people I work with. Everyone from the church is so loving and friendly,” Robert Birlson, Chairperson of the pierogie booth, said.

The St. John Festival has been going on for more than 100 years. It all started with people coming in on trains for homemade pie and chicken dinners. Today it has developed into a place people of all ages can enjoy.