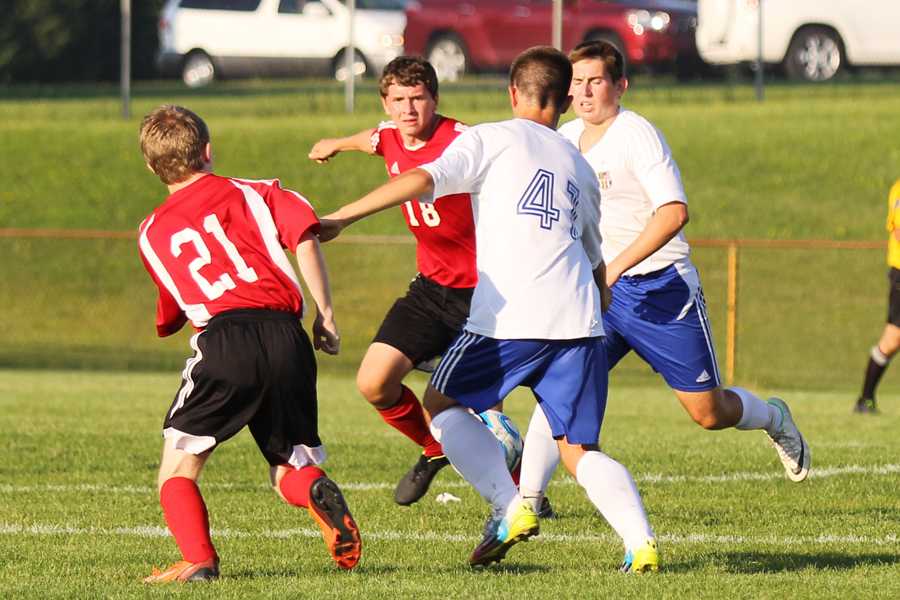 Nikola Vuckovic(11) runs to help Colton Meyers (9) get the ball from Portage players. The boys beat Portage with a score of 6-0.

The sun was bright over soccer field on Sept. 3 as the JV boys soccer team conquered the Portage Indians with a score of 6-0.

“[The game] was pretty good, we usually win with a big margin anyways,” Jacob Galvan (11) said.

Leading with such a large margin gave the boys confidence to play well throughout the whole game.

“We played pretty well in both halves. [There was] not too much of a difference [in the scores in either half],” Galvan said.

Within the first 15 minutes of the game Michael Zubeck (10) was injured but continued playing through the game. Zubeck was taken to the doctor shortly after the game.

“I went up for a volley and as I went to kick it a guy went to block it who was defending it. He went to block it cleats up and after i went to get the ball he got me in the top of the ankle. It turned out I had a bad bone bruise over an old break that i had earlier this year” Zubeck said.

Even though they won with a large margin, the boys still think they have room for improvement.

“We could possess the ball better by attacking third,” Galvan said.

The boys next game is Sept. 13 at Laporte High School.