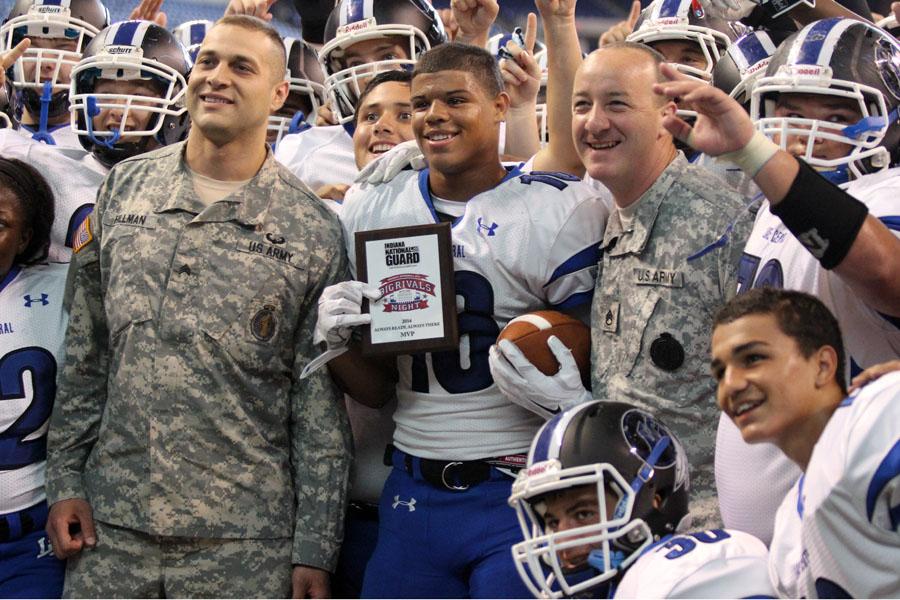 Antwan Davis (12) is awarded Most Valuable Player by the National Guard. Davis snagged two touchdown passes in the Tribe's 14-6 victory over Portage.

The varsity football team had the opportunity to square off against the Portage Indians on the field of Lucas Oil Stadium on Sept. 6.

The event was called Big Rivals Night and included a series of four high school football games. Despite the initial shell-shock of playing on a professional football field, the Indians won the match with a final score of 14-6.

“It was an amazing feeling. The field was pretty big, but we couldn’t let that get to our heads. Coach [Brett] St. [Germain] did a great job of coaching us up not to be awestruck during the game,” Ethan Darter (11) said.

At the start of the second quarter, Antwan Davis (12) snagged an 11-yard touchdown pass from Colin Studer (11). The Tribe was up 7-0 after Jillian Doan (12) scored the extra point.

During halftime, a student from LC and a student from Portage had a dance competition at centerfield. Devonte Brooks (12) was chosen to represent the Tribe. Unfortunately, Portage won the dance battle.

“The plan was to do the dances Studer and [Jacob] Dulski (12) showed me the night before. I started to do them but when I got to about the third dance [move], I couldn’t remember the dances anymore,” Brooks said.

Late into the third quarter, Portage scored a touchdown but failed to make the extra point, which brought the score to 7-6. Daniel Sanchez (12) went against a Portage student in a field goal kicking competition at the break between the third and fourth quarter.

“[I was thinking] if I make this, it will by far be the coolest thing I’ve ever done and a story I can  tell forever. [Also], if I miss this, it’s okay. I’m on an NFL field and it’s something I’ll probably never do again. It’s a win-win,” Sanchez said.

Sanchez missed the field goal, giving Portage both victories in the student activities.

Davis scored yet another touchdown at the start of the fourth quarter. The touchdown pass was from Darter who had just come off the bench.

“I really just needed to stay calm. Antwan and the whole offense already had my back and was in my ear helping me out. I threw the ball to a spot where I thought Antwan could get it, and he made an amazing catch,” Darter said.

Although Portage won the extra activities during the game, the Tribe won the one thing that truly mattered— the game. In addition to the victory, two members of the team were recognized for some type of excellence. Logan Lambert (12) was recognized on the All-Academic Team. Also, Davis was awarded Most Valuable Player sponsored by the National Guard.

“I couldn’t have done it without my teammates and coaches. Everyone had to do their job. We played as a team [and a] family. I’m glad we won,” Davis said.

On Friday, Sept. 12, the Tribe will face the Crown Point Bulldogs away at Crown Point. Kick off will be at 7 p.m.

“Crown Point is always good and the rivalry there is always big. We just need to play our game and we’ll be fine,” Darter said.