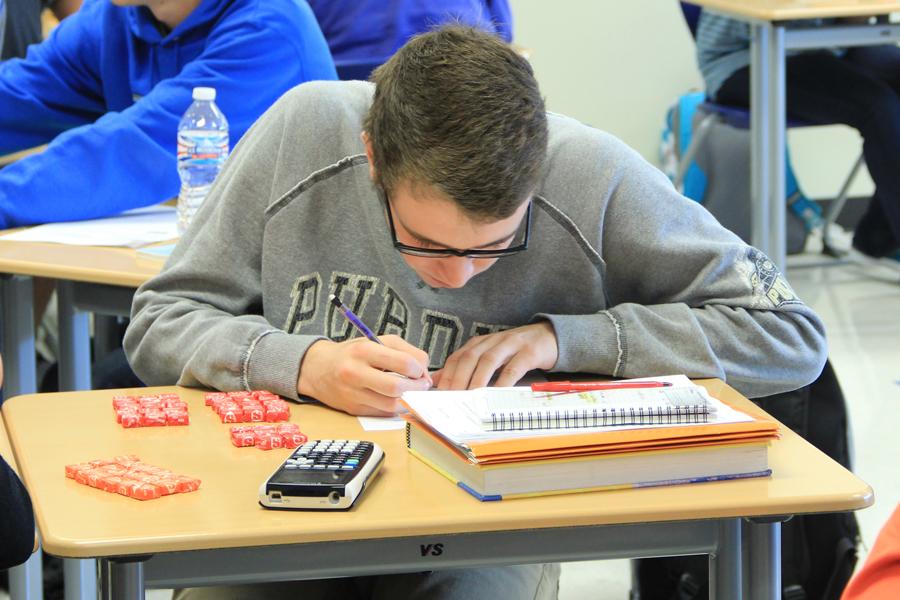 Nicholas Kiepura (12) works on filling out his worksheet for the lab. The lab was used to demonstrate categorical types of data such as color or flavor.

“[The lab] gives [students] real-world data to go through and use when they’re going through and determining categorical data and quantitative data. It goes through and shows them that you can pick up a bag of candy and we can use that to make stats play there,” Mr. Fox said.

The students were separated into groups of three and each group was given a bag of Starbursts to go through and sort by color.

After the students were done gathering their data, they were given the choice to “do what they wished” with it.

“The leftover candy [was the best part of the lab], because the candy tastes good and teachers aren’t allowed to give it out anymore,” Christina Tipman (11) said.

Getting to eat the candy was a plus, but the most important thing about the lab was that the students understood what was trying to be taught.

“I learned that the amount of candy in each bag varies along with the categorical data of colored candy,” Tipman said.

Statistics is not your average math class because it differs in labs and what is being taught.

“I took the class because I thought I would benefit from it and I’m pretty good at math, but it’s not a normal math class.  [It’s not like a normal math class because] you aren’t really solving for something.  You’re looking for the statistics for how likely something is to happen or just percents in general of spending or sports is an important aspect in Stats. Stats is everywhere, you can find statistics for everything,” Tipman said.