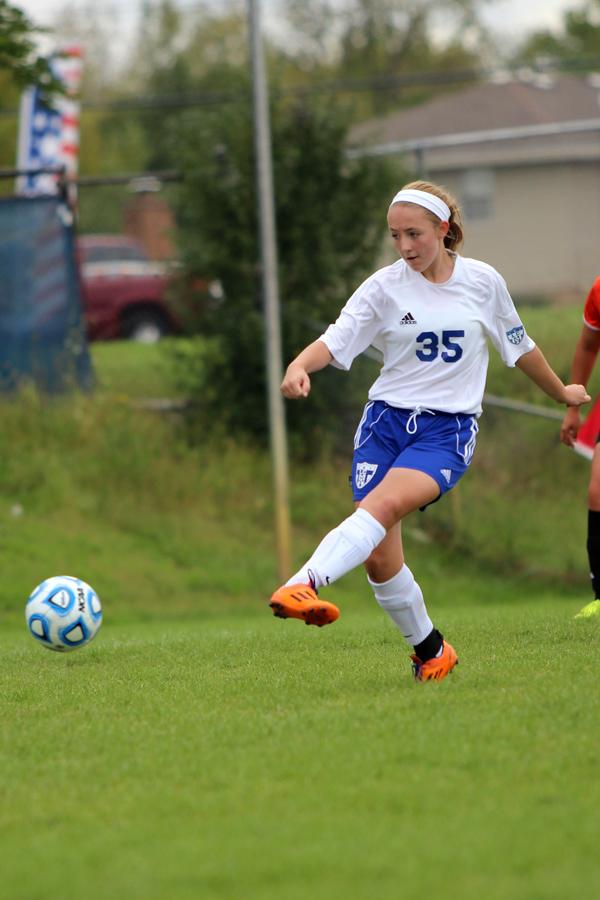 Sarah Noles (9) passes the ball to one of her teammates. The team has finished their home games for the remainder of their season.

On Sept. 13, a JV girls soccer game had the Lake Central Indians and the LaPorte Slicers on the field. The final score was 5-0, Lake Central.

“[I expected a score] not that high, but we were pretty confident that we would beat them,” Cailee Wilkinson (10) said.

For those who showed up five minutes late, they had already missed the first two goals which put Lake Central in the lead. Less than one minute into the game, Lake Central put on a huge rush towards LaPorte’s goal, where Morgan Clapman (10) had a perfect setup for Wilkinson, who put a firm shot into the back of the net.

“I was dribbling the ball up, and my only thought was that I knew it was going to be a quick pace game. I knew we could rule the field, but as I was going with the ball, I tripped over the goalie. I was just flustered.Then I saw that we scored, so I was excited,” Clapman said.

Two minutes later, Lake Central had an one-man rush on goal where Wilkinson took an initial shot on goal that was deflected by LaPorte’s goalie right to Clapman, who put a quick shot on goal to give Lake Central a 2-0 lead. Lake Central finished an incredible first ten minutes of play by scoring their third goal off a deflection of the LaPorte goalie.

“I think we played quite well. There are still things that we need to improve on. Sometimes playing teams that aren’t at our skill level, motivates us that we can win. It just puts the mentality in our head that we are better than everybody, which always isn’t the best thing, I guess,” Clapman said.

Right before half, the Indians put their fourth goal on net when a pinpoint crossing pass came to Cara Scott (10). Besides the impressive offensive explosion, the Indians defense was just as impressive by only allowing one shot on goal for the entire first half.

“I think it was a little sloppy at first, but we picked it up by the second half for sure,” Madison Sarkey (9) said.