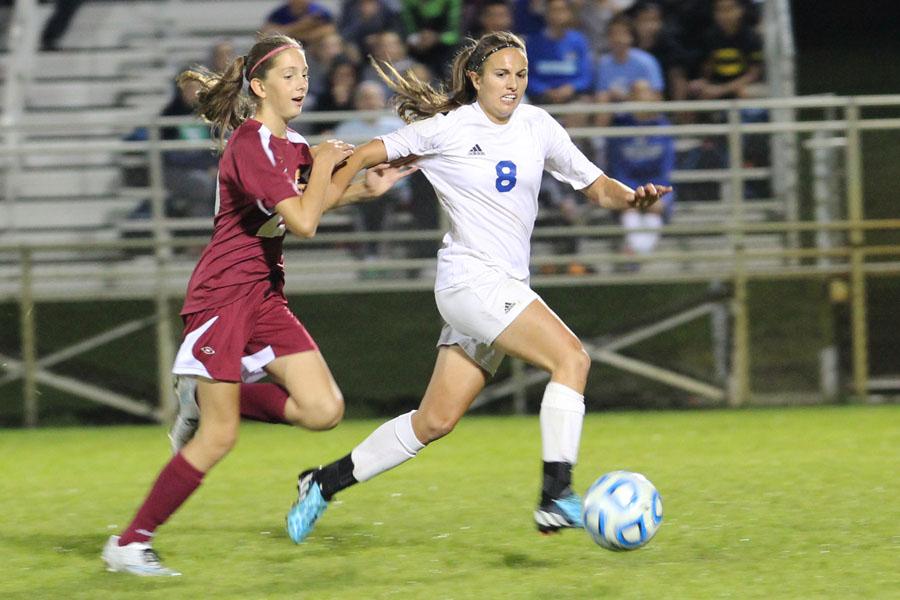 Brianna Dougherty (12) fights off a Chesterton defender. Dougherty scored both goals of the night for the Lady Indians.

The varsity girls soccer team went head to head with the Chesterton Trojans in the final home game of the season. Some of the Lady Indians were honored midfield alongside their parents for Senior Night.

“It was kind of bittersweet. I held it together the whole walk until one of the sophomores [on the team] that I mentored her freshman year came out. I saw her starting to cry, and I couldn’t keep it together then,” Brianna Dougherty (12) said.

As a whole, the team felt very emotional about playing their last home game together.

“I was actually really sad to be playing on the field for the last time with all the girls. We just had like a domino effect of tears once we walked on the field,” Abigail Peppin (12) said.

Thirty seconds into the first half, Dougherty scored a goal, putting the Lady Indians ahead 1-0.

“[Scoring the goal] definitely boosted our morale and everything [because] Chesterton has had real good girls last year and this year. We knew it was going to be a tough fight, but scoring right off the bat gave us a boost that we needed,” Dougherty said.

However, the girls needed to stay on their toes. Chesterton could score at any moment.

“After [we scored], I thought were going to win and it definitely pumped us up, but it made me nervous because it put more pressure on me to defend the goal,” Peppin said.

Unfortunately, the Trojans scored a goal soon after the Lady Indians with 34 minutes left in the first half. The Trojans scored once again at the beginning of the second half, giving Chesterton the lead at 2-1.

“I tried to stay positive and always just say ‘We can get it back, we can get it back,’ and so every time we scored, I was just getting more pumped up. I just really wanted to win,” Peppin said.

About halfway through the second half, Dougherty broke away from the pack and scored her second goal of the night, tying up the score at 2-2.

“[I was thinking] it’s our senior night, and we better not lose this,” Dougherty said.

With about eight minutes left in the game, the Trojans took advantage of an LC error and took the lead at 3-2. However, the Lady Indians were not able to catch up. Chesterton won 3-2 and dealt the Tribe their first loss of the season.

“I’m upset that we lost, but with how we played and everything, it was the best we’ve played this season. I was proud of that,” Dougherty said.

The Lady Indians feel that they have a couple things to improve on before their next match.

“We’re going to watch film of the game and work on what happened with the goals [that were scored],” Peppin said.

The next game for the Indians will be played on the field of the Concord Minutemen. The game will commence at 12 p.m. Eastern Time.

“I just know that from here on out our games are tough,” Peppin said.