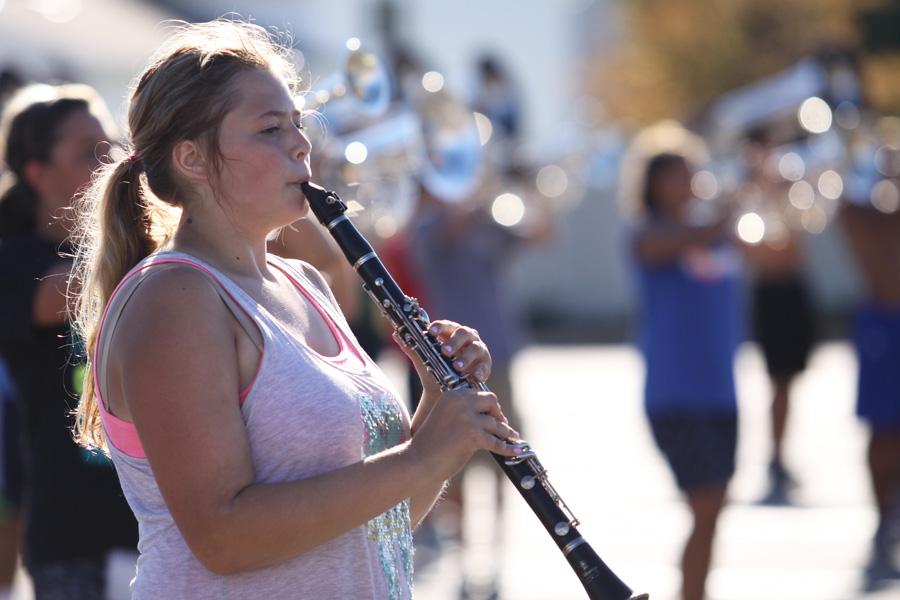 Bailey Kearschner (9) practices the clarinet during practice. The band practices outside at least twelve hours each week, weather permitting.

This Saturday, Sept. 27, the marching band will compete at Mishawaka Penn High School for an invitational. The weekend of Sept. 13, the band competed at Lafayette Jefferson, placing second with a score of 69 out of 100.

“Being our show we knew that it wasn’t going to be perfect. We didn’t expect the run to be perfect, but we still wanted it to be high standard. Our score this time was a lot lower than usual, so that will influence us this time to do better than before,” Christopher Tarnowski (12) said.

The show, 3 Hours, is all about the retelling of TheScarlet Letter through the eyes of Hester Prynne’s daughter.

“We have a lot to do and add a lot, but it will definitely be a better show. Personally, I just think they [last year’s show A World of Her Creation and this year’s show 3 Hours] are completely different shows, and it has so much potential,” Cassidy Michau (12) said.

The season has just started, and the members of marching band will work more and more towards improving the show.

“I want the band to perform as a whole and to work as a team,” Marc Mertsching (12) said.

The band’s next competition will take place on Oct. 4 in Greenwood, Ind., at Center Grove High School.