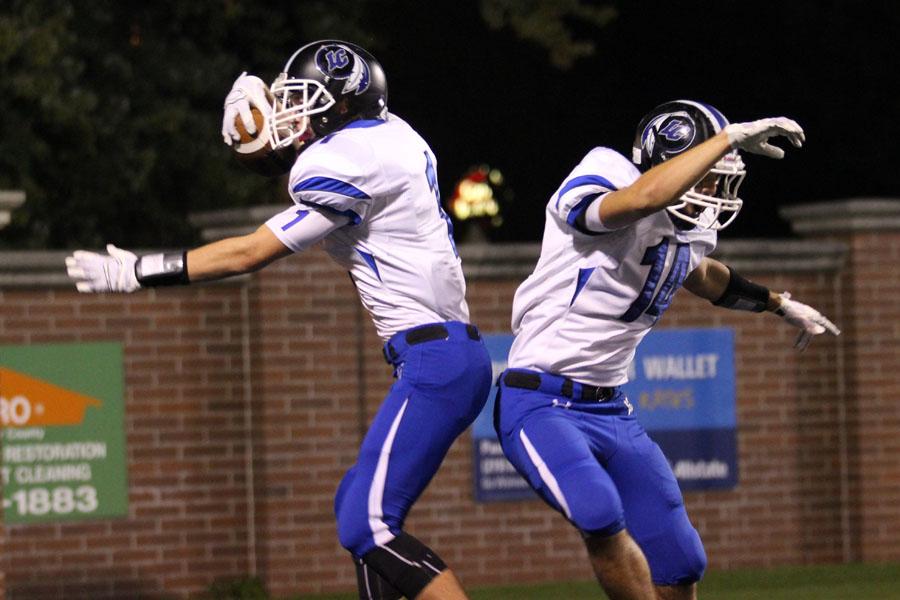 Austin Atkins (10) celebrates with Cody Schultz (12). After Atkins caught his second touchdown pass of the night, Schultz decided to perform a shoulder bump with him.

Sports serve as a metaphor for life. In life, it is not how you start, but how you finish that determines your fate. The Tribe’s 35-29 win over Michigan City fits that saying to a “T.”

The Indians came out of the gate with guns blazing. The faithful fans at Ames Field blinked and found their team up 14-0. The Wolves fought back with an aerial attack, and took a 15-14 lead into halftime.

“Playing Michigan City is always a challenge because they are a really good football team and always give us their best. We got knocked down a few times, but got back up and fought for the win,” Colin Studer (11) said.

The second half brought more scoring and a boatload of drama. With 2:35 remaining in the game, Michigan City quarterback Ryan Washington (12) found Joshua Campbell (12) for a 25-yard touchdown pass. The Indians’ drive failed, and they punted. The punt glanced off the helmet of Wolf Matthew Schoof (12), and Kenneth Singleton (12) recovered the loose ball.

“My plan was to be the first one down [the field], so the defense could have a little more comfort and wouldn’t be so close to the goal line. The ball hit one of Michigan City’s players, and at that point, it was a live ball. I said to myself, ‘I’m going to do whatever it takes to recover it,’” Singleton said.

Because of a heads-up play, the Indians were able to run out the clock and escape with a win. Their focus is now locked on the Trojans of Chesterton High.

“Both the offense and defense need to play their very best in order to get another win in the DAC. Coming out with a W will be a team-pleaser as well as a crowd-pleaser. We need to keep up what we do best, and that would be working hard and winning,” Nicholas Lucas (10) said.

After Friday, Oct. 3, the Burial Grounds will be laid to rest. The Tribe aims to make the final down memorable.