The last victory on the Burial Grounds 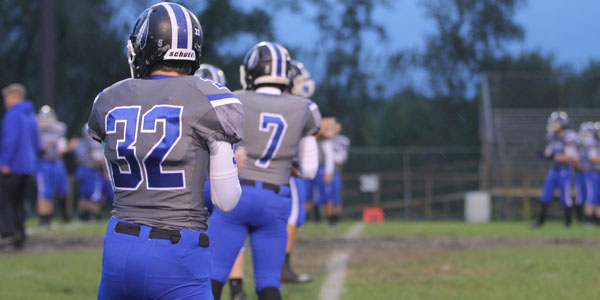 After a week full of spirit, the anticipated homecoming game was held on Friday, Oct. 3. Despite the chilly weather and slight rainfall, many fans still came out to cheer on their varsity football players as they came head-to-head against Chesterton. LC ended the game with a win, leaving the final score 6-0.

Before the game, kicker Austin Chekaluk (11) held high hopes for the Indians’ performance.

“I think we will do well [because] we have Kenneth Singleton (12) and Nicholas Lucas (10). [I think] this will be a tough game, but we can handle it” Chekaluk said.

The first quarter started off with a three-point field goal by kicker, Jillian Doan (12). Shortly after, there was a head-on tackle and interception by Cody Schultz (12) with 1:22 left in the quarter.  The beginning of the second quarter was led by Nicholas Lucas (10) with an interception and only 11:15 left to go in the quarter. By the end of the second quarter, the score was still 3-0. Players, such as Jakob Brown (11), were not satisfied mid-game with the score.

“We have just been making mistakes. [There have been some] mental errors. We should be up by a lot more. If we can fix these mental errors I think we can put up 20 points next half,” Brown said.

By halftime, LC was winning with a current score of 6-0. Spirit week banners were marched across the field from various clubs to display their hard work and school spirit. Marching band put on a short performance, and Emma Hupp (12) and Nicholas Kiepura (12) were announced homecoming king and queen. Throughout all of this, rowdy fans were led in cheers by LC’s mascot, Colin Chenoweth (12).

“Homecoming is going absolutely incredible. I could not ask for a better homecoming. As long as I have been here, this is the biggest homecoming we have had. We want as many students as possible to come support the team. It’s a bittersweet moment,” Chenoweth said.

When the game ended with a score of 6-0, Coach Brett St. Germain, Assistant Athletic Director, had a few lasting remarks on the teams overall achievements.

“I thought our kids competed really hard, but it wasn’t a pretty game by any stretch. The big player of the game would be Jillian Doan. [Since] we have a female place kicker, it would be hard not to recognize her. [Plus] all the points that game came from her. We have two more regular season games and once the tournament starts we will play until we lose,” Coach St. Germain said.