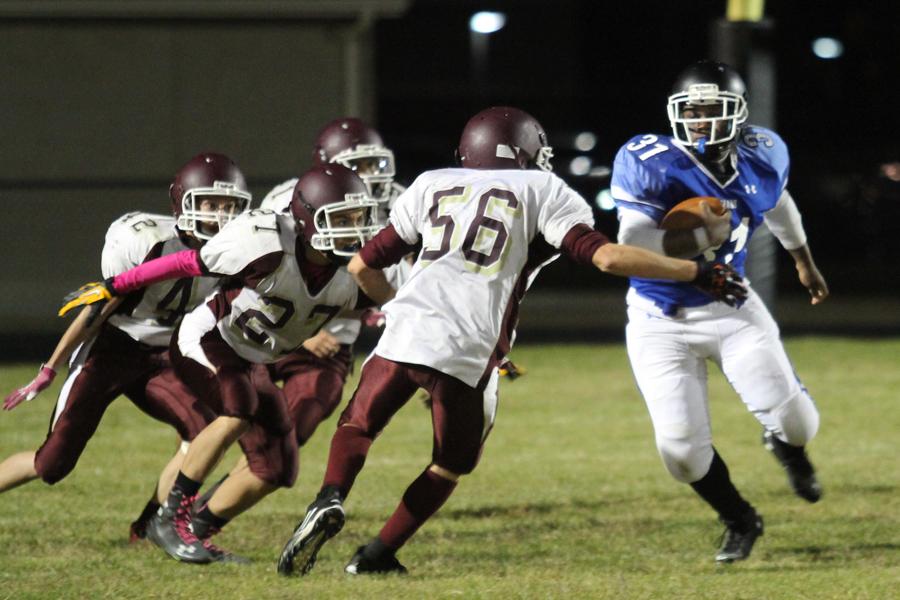 Joshua Williams (9) carries the ball against a number of Chesterton players. The football game was held at Clark Middle School.

On Thursday, Oct. 9, the freshman football team fought against the Chesterton Trojans at Clark Middle School. When they entered the game, the Indians remained optimistic. However, their optimism fell short and the Indians lost 8-38.

“I thought this would be a good test for us. I felt these were two more evenly matched teams that we’ve seen in the last month,” Brian Tomson, head coach, said.

Although the Indians felt ready for the game, the confidence was lost. The Trojans were able to run several good plays sufficient enough to put them in the lead.

“We lost confidence after they got a couple good plays. I felt like we could have changed that around, but it just didn’t happen,” Dakota Bettis (9) said.

The Indians used this tough loss to make plans for improvement.  One player in particular  commented on what he felt he should have done better.

“I did good, but not as good as I should have. I could have ran harder. If I blocked like I ran we probably could have won,” Joshua Williams (9).

It was a hard loss for the Indians. They built up from the loss and are more prepared for future games.