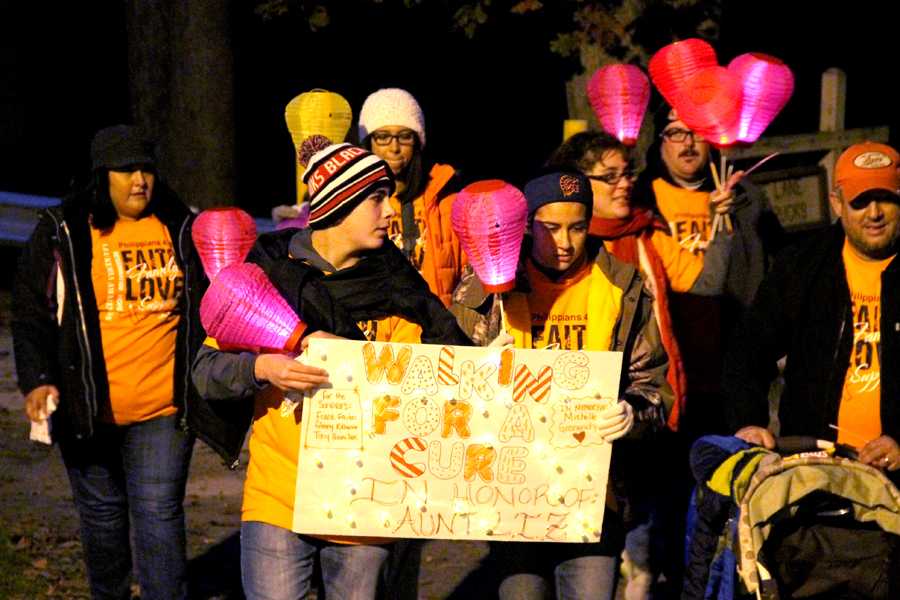 On Saturday, Oct. 18, the Illinois chapter of the Leukemia and Lymphoma Society hosted the Light the Night Walk at the Lake County Fairgrounds. There were four staff members, about ten volunteers and as many as 450 walkers who attended the fundraiser to help reach Northwest Indiana’s goal of raising $74,000.

“I think it went really well. Last year was the Illinois chapter’s first year hosting the walk [in NWI], and with that comes a lot of unknowns. [We] really rely on the participants and the volunteers that have been here every year to know the culture of the walk and how it’s run. Every [walk] is in a different community, and each community brings its own flavor to the walk. This year definitely feels a little more connected because it’s another year of knowing these people who have been affected by blood cancers and knowing their story and knowing why they walk. It definitely makes the walk experience a lot different to plan,” Ms. Ashley Clark, Light the Night Walk manager, said.

Before the walk, the top five fundraising teams from NWI were recognized. By Saturday morning the top fundraising team collected $9910, and together all of the teams raised $20,000. Although the primary goal of the fundraiser was to raise money to help find a cure for blood cancers, more than half of the funds will go toward improving the lives of patients and their families.

“Seventy-six percent of our expenses goes back to remission. That means that this money is going to go towards creating first connections for people, which [is part of] the First Connection Program. It’s basically a program that connects patients with someone who has been diagnosed somewhere around the same time as they have, with someone else who has gone through it or say there’s a mother whose child was just diagnosed. We’ll connect the mother with another mother who’s gone through it. It’s kind of like a peer-to-peer program,” Ms. Clark said.

Just as the Leukemia and Lymphoma Society has brought the walk to to different regions across the nation, the organization has also been working to bring new care to its patients.

“Another great program that the Illinois chapter’s really excited about sharing is the Be Your Own Advocate Guidebook. These guidebooks basically help patients be able to organize and make sense of all the appointments that they have, all of the comments and notes that the doctor says [and] all of their medications in one place. Sometimes when you’re diagnosed with blood cancer, you’re meeting with a million different doctors who are all telling you so many different things, and sometimes your papers are all over the place, but then with this guidebook, it can all be in one place. There’s also resources in the back of it for each patient, based on their disease,” Ms. Clark said.

At the same time throughout the night, two other walks in the area were also taking place in Chicago and Elmhurst. The walk in Crown Point was first brought the area last fall.

“This area may not have been served by a walk because even though this area’s so close to Chicago, it’s still a very different community than Chicago. It’s its own separate community, so [it’s about] making sure that the people of NWI feel like we’re serving them in the same way that we’re serving people in Chicago,” Ms. Clark said.