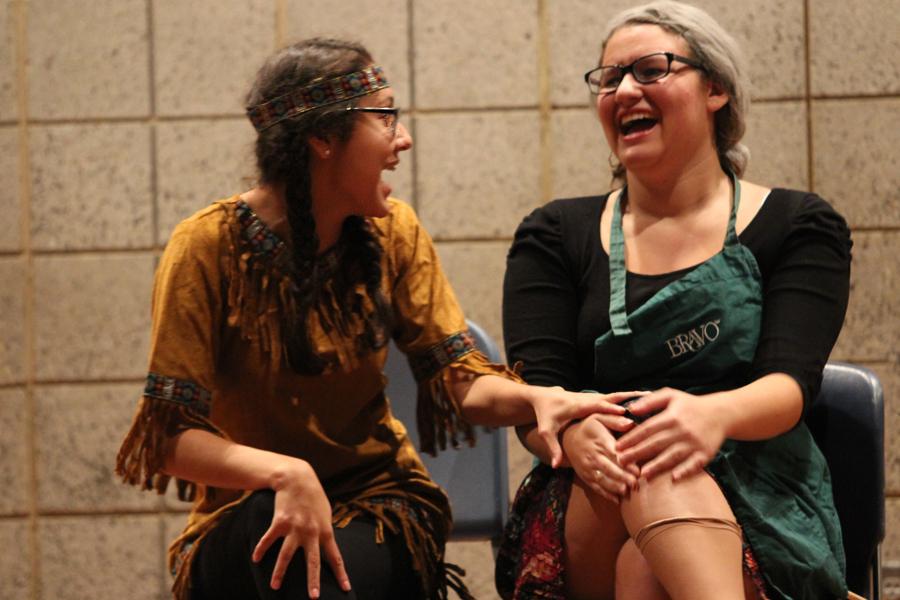 Melissa Torres (10) and Erini Collaros (11) crack up during a game of Hitch Hiker. The game involved a “car” of four people who had to pick up a “hitch hiker” whose mood affected everyone else’s.

On Oct. 16, Mrs. Pam Neth’s, English, Advanced Drama class took the stage for their annual Halloween improv show. Because of the upcoming holiday, the actors in “The Phantom of the Improv” and “Improvination” dressed to impress in their best costumes for the performance.

“I think [wearing costumes] got the audience more into [the show], especially with the costume contest,” Elise Bereoles (11) said.

There are two Advanced Drama classes, and each is split into three different groups. This gives the performers the opportunity to not only compare themselves with each other, but also to help each other improve.

“Having other groups perform helps out a lot because it helps exchange a lot of new ideas. Also with more groups we can bring in larger crowds. The downfall of having so many groups is that it’s harder to schedule show dates,” Jessica Sellers (12) said.

Next up for the class will be performances of its first scripted shows, which includes “A Ghost for Rosanda” on Nov. 13 and Dec. 4.