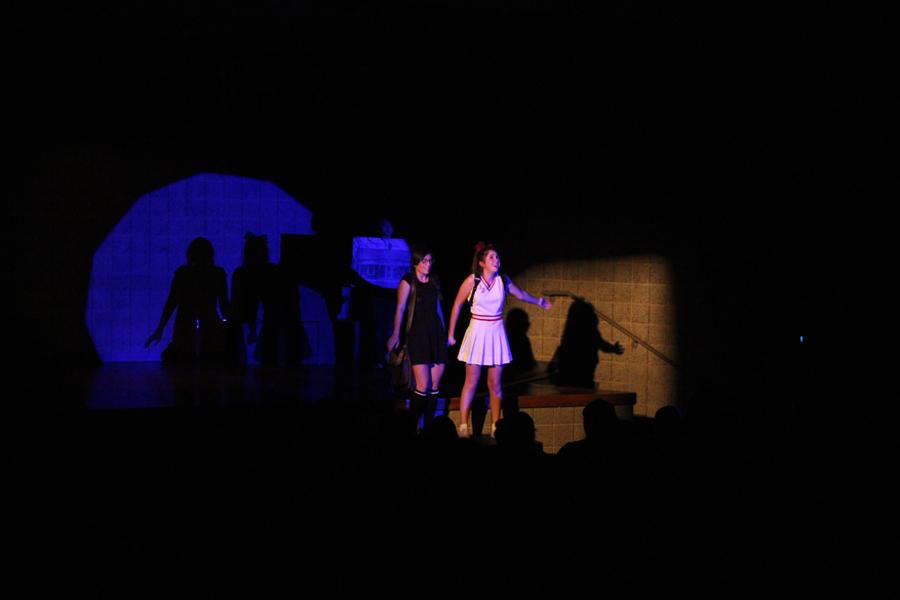 olding hands, Emily Book, played by Anastasia Rauch (11), and Jenny McGrath, played by Alayna Wallace (12), stand on the edge of a railroad track in order to feel the rush of the train passing directly in front of them. Emily believed the idea was dangerous, but Jenny encouraged her to stand near the train tracks with her.

After eight weeks of eight-hour Saturday rehearsals and three-hour preparations after school for a week, the cast and crew of Lake Central Theater Company’s “The Sparrow” successfully performed their dramatic production on Oct. 23.

“We have worked so hard and for so long, and for it to just come together so perfectly is just the best feeling in the whole entire world,” Stephanie O’Drobinak (10) said.

In “The Sparrow,” high-school student Emily Book, played by Anastasia Rauch (11), possesses telekinetic powers that grow out of control when she experiences strong emotions.

“I never expected [getting the part of Emily Book]. When I got the part, I was so happy, and I’m so glad I did.  It was the greatest experience ever,” Rauch said.

After accidentally causing a fatal bus accident and moving away, parentless Emily decides to move in with the McGuckin family and attend Spring Farm High in her home town.  At school, Emily befriends the quirky Mr. Christopher, played by Nicholas Kiepura (12), who introduces her to head cheerleader and honor roll student Jenny McGrath, played by Alayna Wallace (12).

“I love my character. I feel like I actually don’t have to act because the ‘awkward teacher’ is kind of exactly what I am, so it’s really easy and also makes it really fun to be on stage,” Kiepura said.

Emily has many interesting experiences including accidentally causing the hearts of the pigs her science class is dissecting to begin beating and using her powers to save Jenny, who ends up dangling from a banner in her school’s gymnasium in a cheerleading accident. The emotional and dramatic production includes beautiful dance numbers, symbolism and a shocking ending that left the audience in tears.

“I think [the play] is awesome because we haven’t done anything like it in such a long time. It has good themes, like forgiveness, so I was really excited to do a show that was deep and emotional,” Rauch said.

The cast, crew, director of the play, Miss Nicole Raber, Guidance, Mr. Tom Plummer, technical director, and Ms.  Pam Gentz, choreographer, are proud of the performance after all the time and energy they put into the production.

“I think they did an amazing job,” Miss Raber said.