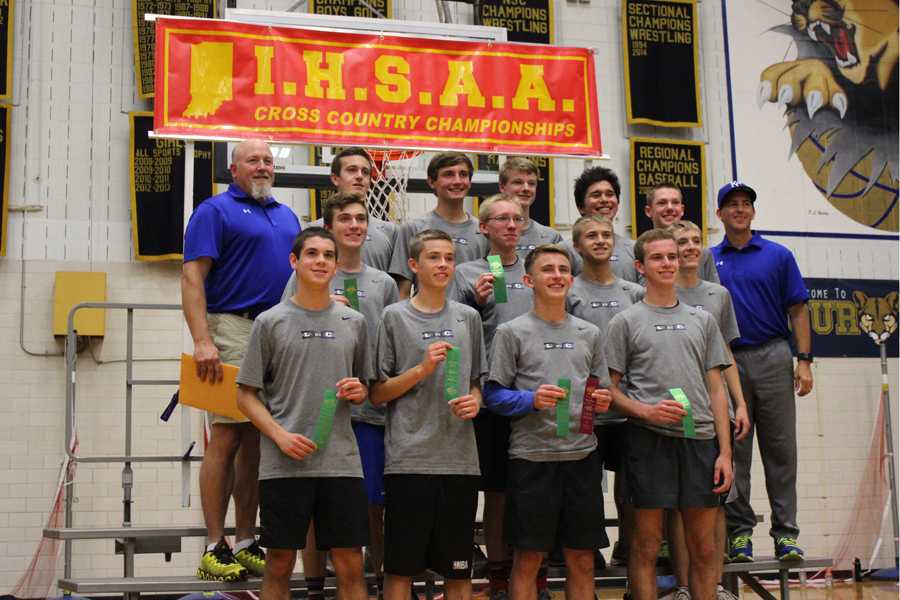 The boys display their accomplishment of fifth place overall at the New Prairie semi-state meet. The team finished with a score of 156 points, and will advance to the state meet at Terre Haute.

On Saturday, Oct. 25, the varsity boys cross country team traveled to New Prairie High School to race in the semi-state meet. The boys placed fifth overall, with one of the team’s runners, Kameron Konopasek (11) in the top twenty.

“I think we did pretty good, not what we expected, but we still made it to State,” Konopasek said.

The team advanced to State, with Konopasek finishing in 13th place as an individual.

“[As a team we] didn’t do as good as we hoped to do, but we pulled together and we did a good job and advanced to State,” Cole Easterday (11) said.

While the boys did a great job, they still believe they could have improved on minor things.

“[We] probably could’ve worked harder during the season leading up to it and take it more seriously,” Easterday said.

To help their performance, the boys felt they could have improved during the race.

“We all could’ve tried to group together a little more and stay more towards the front, but we all kind of got separated,” Konopasek said.

The boys are practicing different things in order to prepare for State.

“We’re taking a lighter week, so we’ll be nice and fresh for State,” Easterday said.

While the boys are trying to practice differently, they are also hoping to perform well during the race.

“Hopefully, we just all get a little faster over this next week and just stay grouped together and try to make it in the top ten,” Konopasek said.

The boys will travel to Terre Haute on Nov. 1 to take on the State meet.