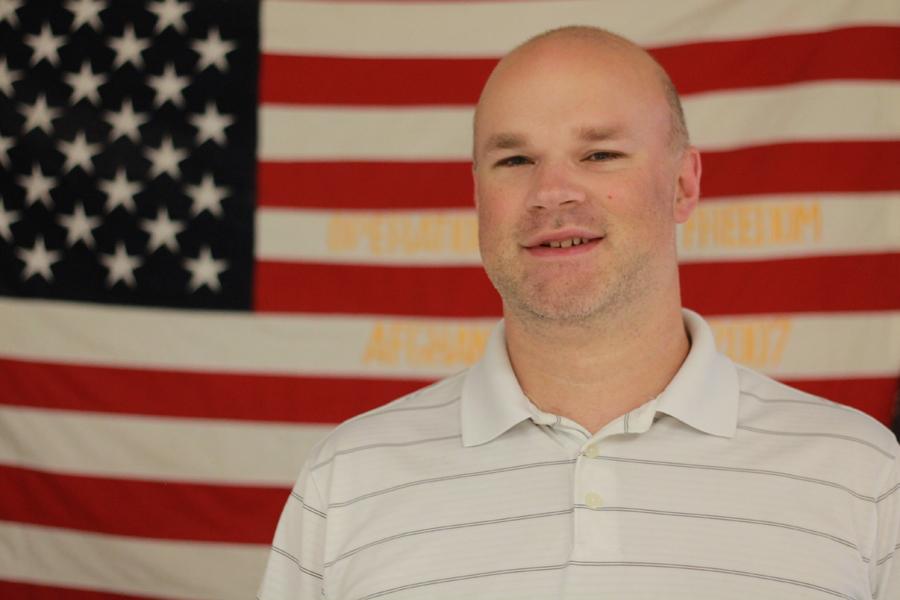 Q: Why did you start sending the cards to the soldiers overseas for the holidays?

A: I heard about it about a year ago because my family did it, and I thought it would be a neat experience to do it for the school.  If it’s 3500 cards that could go out to them, I figured the more cards the better for the soldiers overseas.  I just figured to bring it to the school. I know [Mr. Tom Clark, Social Studies,] does a lot of things like the veteran research, so I figured I’d try to hop in there and do something just for the school, for school pride and to serve the community.

A: Last year was the first year we did it here.  This year is the second year I’m going to do it.  Last year we ended up sending over 2100 cards total, so this year I want to try and see to get over 3000.

Q: How many people participate?

A: As far as my own students, I let all of my classes [do it]. I just tell all my classes and their families that if they want to send in old cards from years ago that they just have in the attic, they can just bring those in. On average, I would say last year about half my students probably brought cards in. This year I’ve had quite a bit of students already bring stuff in [and] even had students who I don’t have show up with bags of cards. Last year, a lot of the teachers [and] a lot of staff members in the office brought a lot of stuff in. As far as who participates, I don’t know. As far as signing the cards, all of my students sign some. A lot of students who have SPTs will take them. Say if they have SPT third hour, one might come in and say, ‘Hey, I’m going to SPT. Can I have a stack?’ and I just give them a stack, and they take it down there and have everyone sign it. I’ve had other teachers request us bring some to them, so whoever has that teacher will go down and bring it to them. A lot of the kids participate. I don’t have an exact number, but I’d say at least half of my students are participating in them.

Q: Have you heard any feedback from the soldiers?

A: What we do is send it to the Red Cross and then the Red Cross distributes it. It doesn’t go directly from Lake Central. A lot of the students have signed Lake Central students, which is nice. I’ve talked to some soldiers from the area who have gotten letters like this from the Red Cross, [but] I don’t know if they’re from us or not. They could be from anywhere, but they really do appreciate it, especially a few of the soldiers who really do have no one, like if their parents have both passed away, if they’re not married or might just only have a girlfriend, that’s it. They really appreciate getting something because they see other guys and women getting all these letters and mail, and they don’t get anything. When they get their name called, and they get something — I know it means a lot to them.  One of my best friends actually was a Marine and now is an Army Reserve and has been overseas a lot, and he said the same thing.  Once he found out we’re doing this, he just said, ‘Seriously, you don’t even know how much this means to a lot of those people.’ It also goes to army hospitals to wounded veterans. I would imagine just from the hearsay from the military guys that it does mean a ton.

Q: When does it start?

A: We’re doing it in November, so I’m going to put [something] in the announcements this week. As of right now, I’m getting all the cards brought in. I’m going to get everything organized this week, and then probably start doing the signing in the next few weeks. It ends right at Thanksgiving because I have to get it in by the end of November. It will basically go through the middle of November.  We’ll probably start next week, which is the 10th, so we’ll start right around Veterans Day, which will be nice, and probably go through Thanksgiving.