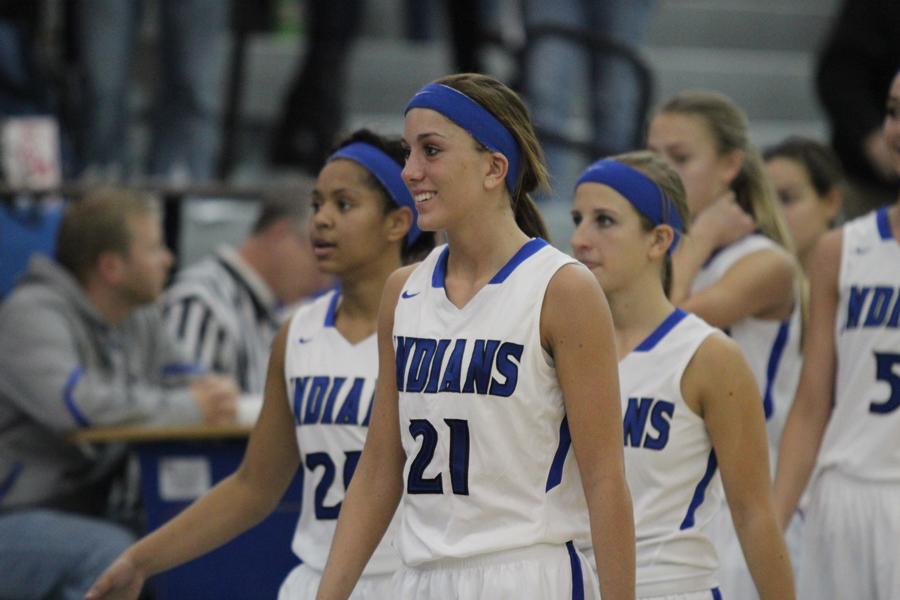 Tara Zlotkowski (12) celebrates with a smile, walking off the court with the team following behind her. They defeated Chesterton with a score of 79-50.

On Friday, Nov. 28,  the Lady Indians conquered the Chesterton Trojans 79-50.  They kept the baskets coming throughout every quarter, with only a few timeouts called and little struggle. The Indians showed no mercy.

During the first quarter, the team started off perfectly. Chesterton was fighting to gain the ball back, but there were some tough times the Indians had to work out to make some baskets.

“When [Chesterton] would get around us, we would have to cut them off and we didn’t do that.  [We need to improve] moving our feet on defense more, just being in stance, and being more ready than we were,” Tara Zlotkowski (12) said.

There was even a few pushes and slides on the court, but that did not stop the ladies from defeating the Lady Trojans. Each team member helped each other up and back onto their feet. “ I think we did really good collectively as a team, and we did what we needed to do,” Tara Zlotowski (12)

Even though there were  some falls and fouls, the lady Indians pulled through.  They showed Chesterton what teamwork really is. Coach Marc Urban, Physical Education, thought the same.

“The outcome was what we wanted, and I thought that our girls played well for thirty-two minutes.  [They] can always improve on things.  We’ll learn from this tape and move on.  Hopefully we’re better tomorrow night,” Coach Urban, Physical Education said.

On Saturday, the team played against Highland at home, winning 75-31.  Come support the Lady Indians on Tuesday, Dec. 2 against Munster at home.