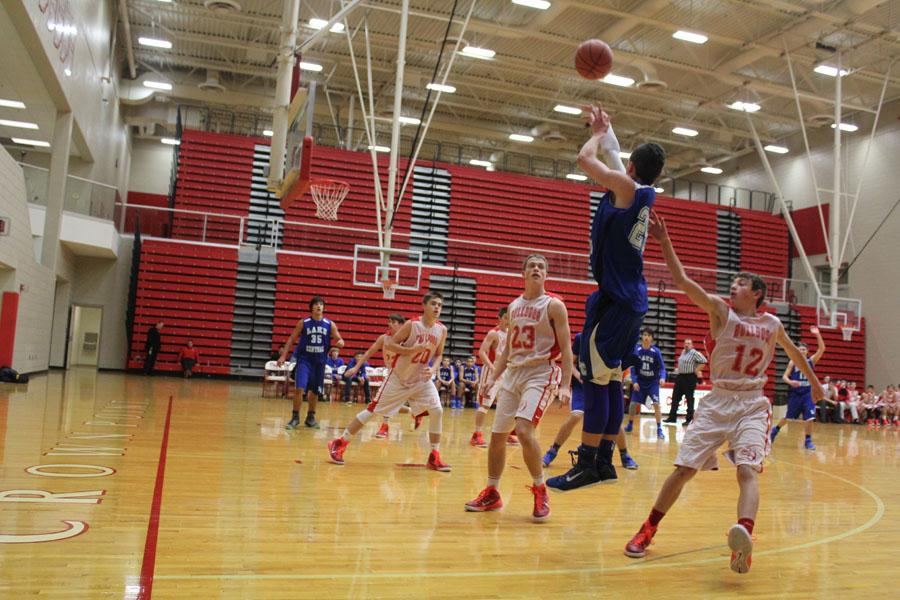 Conner Tomasic (9) shoots, avoiding a hit from Nick Phillips (9) on Crown Point. Tomasic (9) made this shot while the team was in a slump, resulting in loud cheering from the fan section.

Maintaining a strong lead throughout the entire game against the Crown Point Bulldogs destroyed the “rough start to a season” stereotype that fans normally put on a new set of freshman basketball players during their game on Dec. 1 at Crown Point High School.

“I think the game went really good for us. Crown Point has always been a good team throughout the years of middle school ball and AAU,” Justin Graves (9) said.

The freshman team was pretty confident about their win against Crown Point, but there is always room for improvement.

“We have a lot to improve on right now, but we’re just getting used to playing together as a whole team and getting used to the pace of the game,” Coach Brett Summers said.

The players were aware of the areas that needed improvement, but they also did not ignore the hard work that they dedicated to the game.

“I think if we play to our potential, we could end up being the best team in the conference,” Conner Tomasic (9) said.

The Indians shut the Bulldogs out, ending the game 42-32.

“Knowing where we’re supposed to be in the flash of a moment, that’s what it is right now. [We’re working on] getting comfortable with what we’re doing,” Coach Summers said.