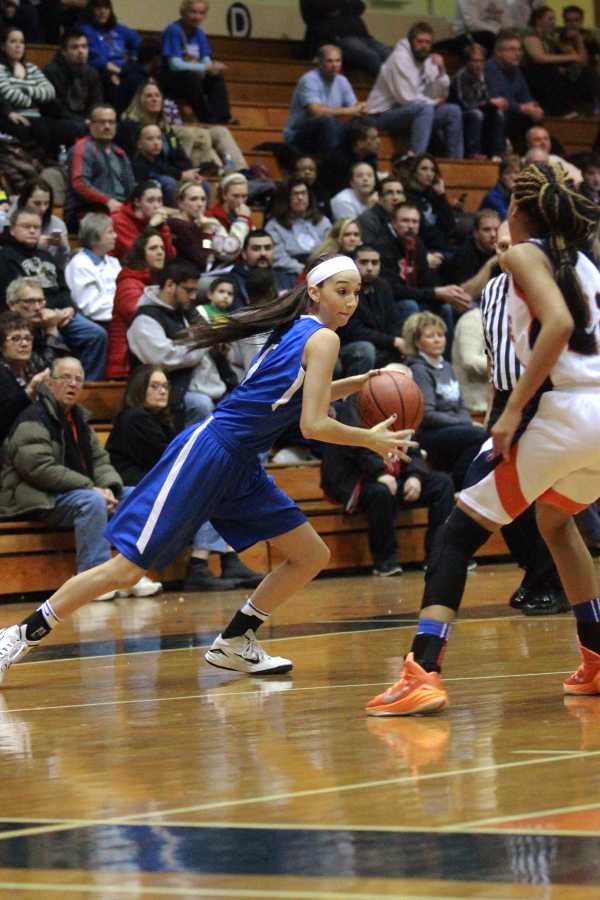 Victoria Gard (11) dribbles hard around a West Side defender. The Indians beat the Cougars 75-65.

The varsity girls basketball team faced off against the Gary West Side Cougars on Wednesday, Jan. 14.  The Indians dominated over the Cougars with a final score of 75-65.

“It was a fun game against two good teams, and it was a fun game to play. I thought we played well. We did some of the things that we needed to do to try to contain Dana [Evans (10), Westside].  We had to prove to ourselves — that we were capable of doing the little things, and I think we did that for the most part,” Coach Marc Urban, Physical Education, said.

With the Indians ranked Number 1 and Cougars ranked number 2 by the Times of Northwest Indiana, the two teams had been predicted to be this year’s toughest competition in the area.  Lake Central beat West Side in the regular season last year, but lost to them in Sectionals. This game provided a chance for the Indians to avenge the previous loss; however, the team knows to continue working hard for future sectional games.

“It was really a preview to our games in February, since they’re in our sectional, and they’re one of the better teams in our sectional.  We were just hoping to play well and get ready for that next game,” Coach Andy Gurnak, Physical Education, said.

The Indians’s strong defense and disciplined offense assisted them in their victory. Four of Lake Central’s players finished with double figures, including Tara Zlotkowski (12) with 20 points, Lindsay Kusbel (12) with 19 points, Ashley O’Malley (12) with 15 points and Rachel Bell (11) with 13 points.
The Indians face off against Portage next at home on Saturday, Jan. 17, at 7 p.m.