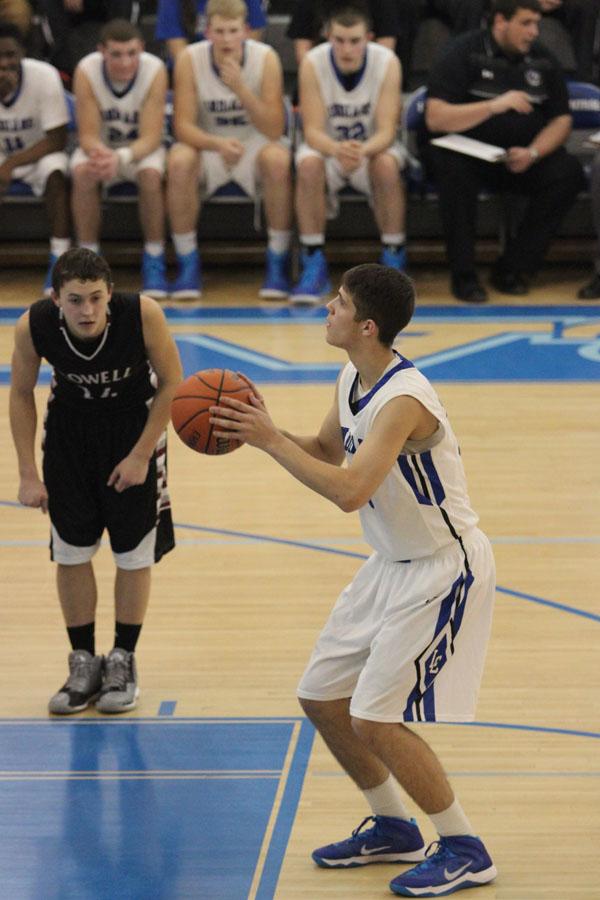 Ian Martin (12) prepares for a free throw after a penalty during the game on Jan. 20. The boys beat the Lowell Red Devils 67-56 in Lake Central’s gymnasium.

On the evening of Jan. 20 the varsity boys basketball team came out as victors against the Lowell Red Devils. The home game took place at 7 p.m.

“I have been improving in scoring and defense. [As a team], we didn’t play our best. We could improve on defense,” Ian Martin (12) said.

The team keeps an open mind on aspects of the game to improve on.

“[The opponents] hit a bunch of shots that they shouldn’t have and usually don’t make,” Martin said.

Lowell High School is not in the same conference as Lake Central, so this was the only time the two teams will play each other in the season.

“As a team, we played OK. We didn’t do great on defense. Some shots were falling on the offense, but we got the win, which is good enough,” Joseph Bannister (12) said.

The score was close throughout most of the game.

“[Lowell] played well. They came with a lot of energy. They made a good opponent. We played well, but we did not have the same energy that they had,” Bannister said.

The boys ended the game with a 67-56 victory. Their next game will be held Friday, Jan. 23, at Valparaiso High School at 7 p.m.