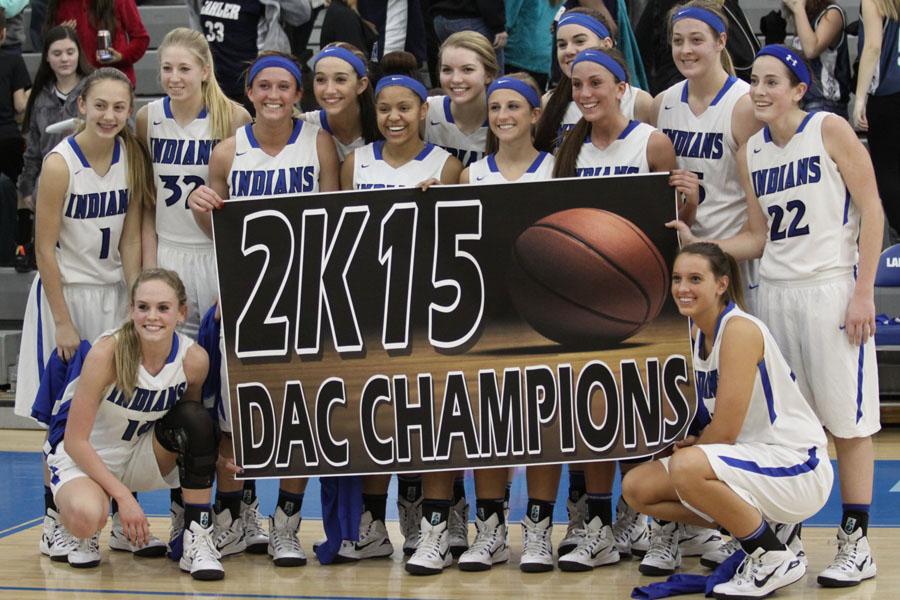 Players from the varsity team celebrate after earning the title of DAC champions in a game against the Valparaiso VIkings. This was the first time in the history of the basketball program that the team was undefeated in the DAC.

On Friday, Jan. 23, the varsity girls basketball team took on the Valparaiso Vikings at home. This game was highly anticipated — if the team won, they would be crowned the DAC champions.The team pulled together to gradually increase their lead over the Vikings to a final score of 55-45.

“We did lose a couple of games but in the conference, being undefeated, it was definitely one of our goals from the start. We know that we still have a lot of work to do if we want to get better and [set] higher goals. We’ve grown up [together], and we’ve been on the same team for a while. We played together in middle school and even started back before that in fifth grade and sixth grade AAU,” Gina Rubino (12) said.

Throughout the course of the game, the Indians kept a solid advantage over the Vikings and continued to set the bar higher than ever. The team’s intensity did not diminish when the Lady Vikings rose to the challenge.

“This is a group of kids that has gotten to play together for quite a few years. They get along really well and have a lot of characteristics that come out on the floor and work in [the team’s] favor,” Mr. Jeff Sherman, Math, said.

The next varsity game will take place on Wednesday, Jan. 28, at Hammond Morton High School at 7 p.m.