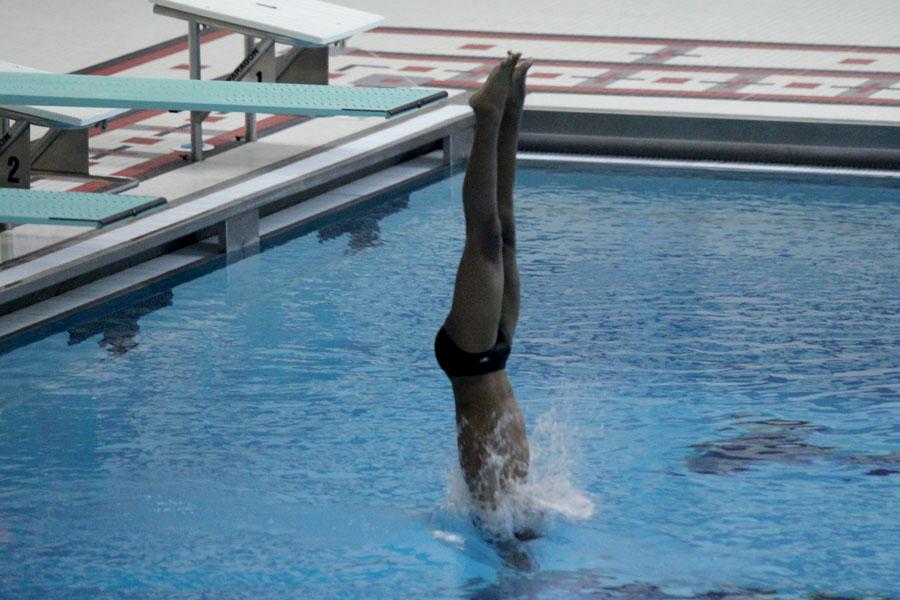 Drake Hunt (10) breaks through the water as straight as a board while he follows through with his dive. Hunt’s final score was 232.4.

The varsity swim and dive teams traveled to Munster High School on Thursday, Jan. 22. The final score for the boys was 58-128 with Munster winning. The girls also lost with a score of 75.5-110.5.

“I think a lot of people stepped up and showed what they are capable of. We are where we should be for Sectionals, and we had pretty good times,” Victoria Springman (11) said.

Even though the teams did not win, the swimmers agreed that they tried their hardest and are preparing for upcoming meets, such as those for Sectionals.

Although the team as a whole did not come in the lead, Higgins’s performance earned the highest score of all the divers, including both girls and boys.

“The boys didn’t put up the full and normal lineup because they were trying to compete with each other to qualify for Sectionals,” Gavin Baisa (10) said.

At Sectionals only three swimmers and three divers can qualify for each event and only four per relay can also qualify. The swimming and diving teams will be heading to Sectionals on Feb. 5 and Feb. 7.