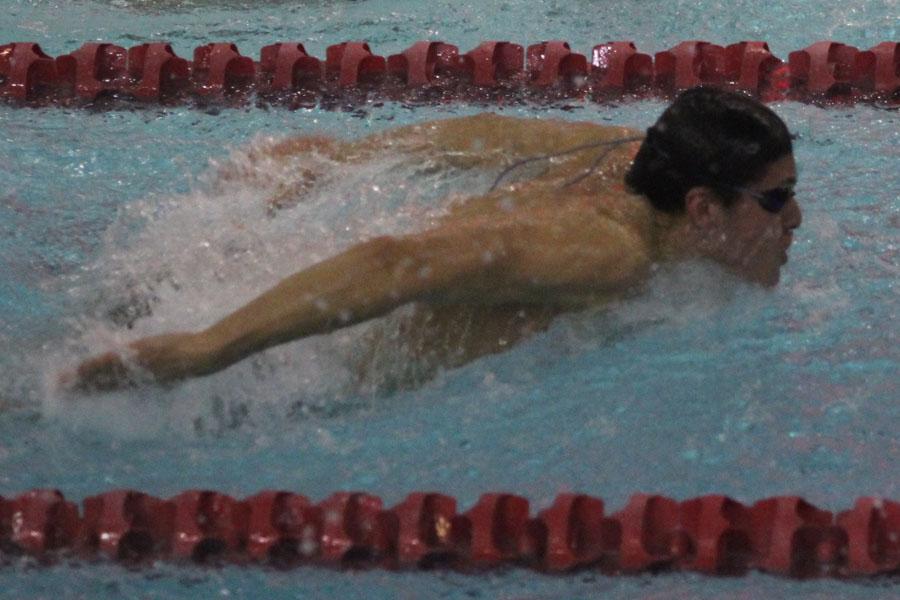 Joshua Barajas (12) does the butterfly in the 200 IM. Barajas placed second in this event.

This past weekend on Jan 31, the Duneland Athletic Conference championship rolled around, and boys swimming and diving teams placed second with a score of 330. This is the first time they have placed second in years.

“The team as a whole did very well. We had a lot of really good swims, especially from [Connor Homans (12)], who won both of his events and was named MVP of the meet. We got second place as a team, which we hadn’t done in a long time,” Joshua Barajas (12) said.

“Being named MVP felt accomplishing and just a really good feeling that all the hard work pays off eventually. For my swims, winning both of my events definitely made me happy, especially knowing I was really rested for the meet compared to the other teams,” Homans said.

Homans was not the only Indian who placed first. Alex Morgan (11) placed first among the seventeen divers too.

“I got first in my event and a new personal best score of 460.7, but I think I still have a lot of ways to improve,” Morgan said.

Everyone on the team has been working on improving their skills since the beginning of the season.

“Overall the team did well. Everyone was able to leave the meet with a best time or right on their times, so for this part of the season, we are right where we need to be,” Homans said.