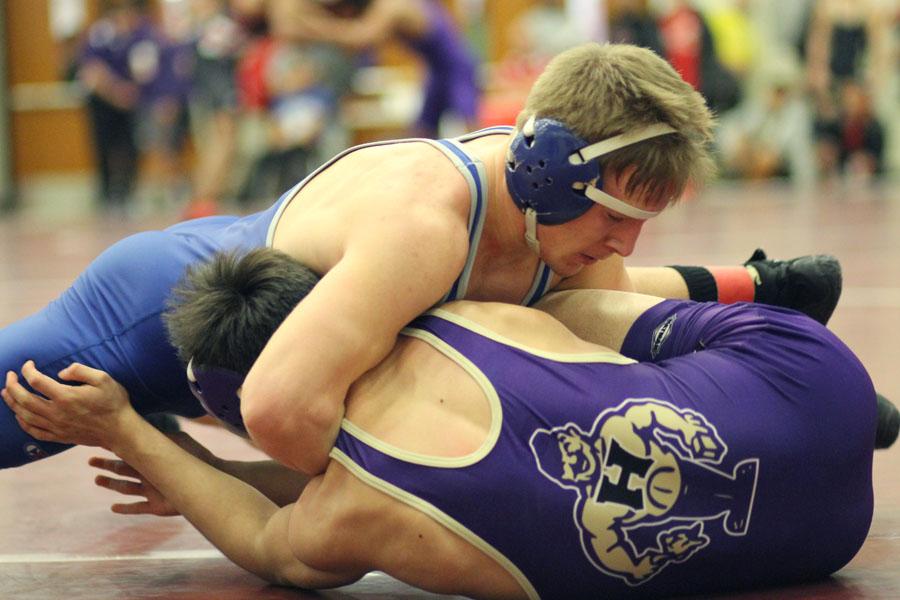 Kodie Christenson (12) puts his opponent into a cradle. Christenson beat his Hobart competitor, leading him to the Regional finals match.

On Saturday, Feb. 7, the varsity wrestling team took 12 members to the Regional tournament at Calumet High School. As a team, the Indians took fifth place with 72 points, but also had individual champions and place winners.

“I think for me, [the tournament] went the way I thought because everyone that I [competed against] on Saturday, I had beat previously. I think it went as planned. The goal [for Semi-State] is just to get through the first two rounds and make it down to State, and after that, just to take it match by match,” Christenson said.

“Last year, I kind of felt like I was more of an underdog, and I had to prove myself compared to this year, where I went into Sectionals with a [number] one seed. I kind of had the expectation to win, so that’s been a big difference from this season to last,” Kleimola said.

However, for Branden Truver (12), the Regional tournament brought on a series of firsts. Although he was not favored to win the championship, he made an impressive run to the finals match. Truver beat opponent Gaige Torres of Portage for the first time with an 8-5 decision, leading him to the finals. This was not the first surprise of the day. In the championship match, Truver was also victorious over long-time rival Jason Crary of Munster with a 4-2 decision to secure first place.

The five qualifying wrestlers will compete in the Semi-State tournament at Merrillville on Saturday, Feb. 14.