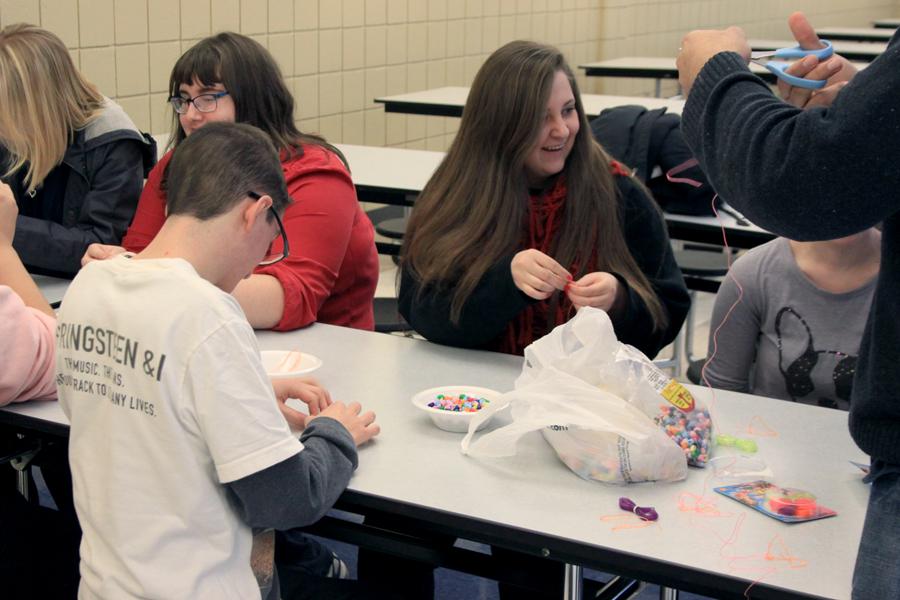 A group of members from Best Buddies participate in making their choice of necklaces and bracelets for either themselves or someone special. The beads used were heart shaped to go with the theme of Valentine’s Day.

On Monday, Feb. 9, love and friendship was in the air. The members of Best Buddies celebrated Valentine’s Day with themed games to get everyone excited for the upcoming holiday.

Four different stations were set up in the cafeteria. Games such as ‘Pin the lips on Miss Valentine,’ ‘Musical hearts,’ ‘Valentine bingo’ and ‘Heart jewelry’ were available for the club members.

“I’m enjoying [the party], but I think the kids are enjoying it more. I think that’s what’s important. My favorite station is ‘Pin the Lips on Miss Valentine’ because it’s a new one. We haven’t done that before. They’re a little confused, but they seem to be getting into it. I think the students like the musical chairs the best because they can move, and movement is always enjoyable,” Ms. Kim Freeman, Physical Education said.

The stations that stood out the most to participants were ‘Musical Hearts’ and ‘Pin the lips on Miss Valentine’.

“I like [the Valentine’s Day party]. I always like when we do the games and stuff. I like the musical chairs the best. I would say everyone else likes the musical chairs too just [because] the bracelets are more for girls, and this can be for everyone,” Marissa Lugo (12) said.

This wasn’t the first party the club has thrown, and it won’t be the last. Best Buddies throws these parties with the sole purpose of getting fellow students together to make new friends. For some people, friend making isn’t so easy, but with Best Buddies, the process is much easier.

“This club has opened people up due to the excitement everyone has here. Some people who were very shy have now opened up, and they’re smiling a lot more,” Kaitlyn Fassoth (12) said.