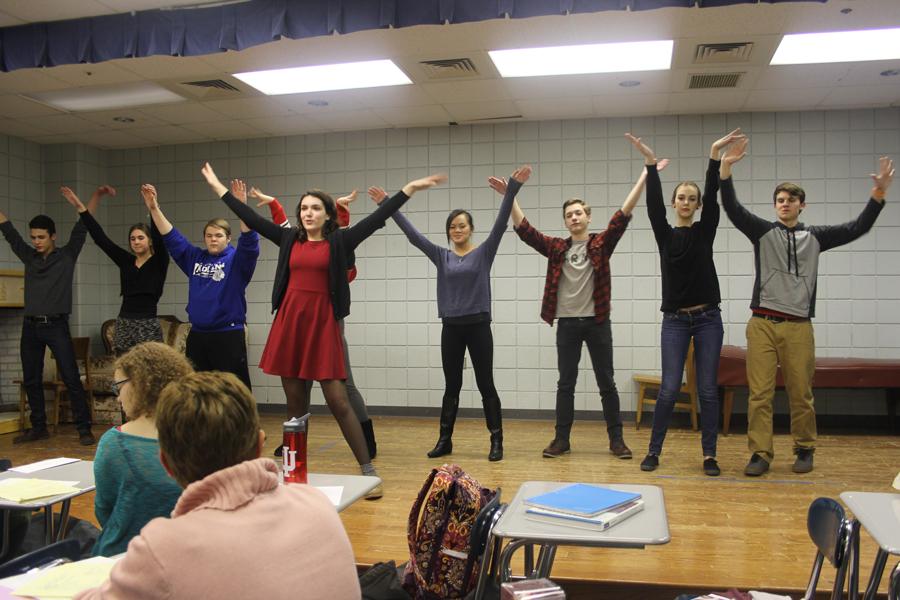 Cast members from “Forbidden Broadway” run through a number titled “Glosse Fosse” for Mrs. Pam Neth, English, and the technical designers. The rehearsal on Feb. 10 was an opportunity for the designers to see what the actors have been working on and work with them to see what still needed to get done.

On Feb. 10, the cast and crew of “Forbidden Broadway” got together for a combined technical and acting rehearsal. The purpose of this was to give the two aspects of the show an opportunity to come together.

“[The rehearsal was helpful] because [designers and actors] can collaborate together and come up with different ideas, and it helps everyone get on the same page,” Rebecca Ashby (11) said.

The props, costume and makeup teams got to watch each number in Act 1 perform, which gave them the chance to speak one-on-one with the actors.

“I think the process [of designing number-by-number] is a really good one. It allows all of us the rare chance to collaborate together about just one number of the play. With different musicals being thrown together into one production, everything can get confusing. This way, everyone gets a very clear idea of what we need for a specific part of the play,” Katherine Veronesi (10) said.

Unlike other musicals that have been put on in the past, “Forbidden Broadway” is a revue, which means that it is more of a collection of songs and skits than a plot-driven show.

“[The show is] phenomenal and spectacular and funny. We put a lot of work in it, and it would definitely be worth [the audience’s] money and time [to come see it],” Ashby said.