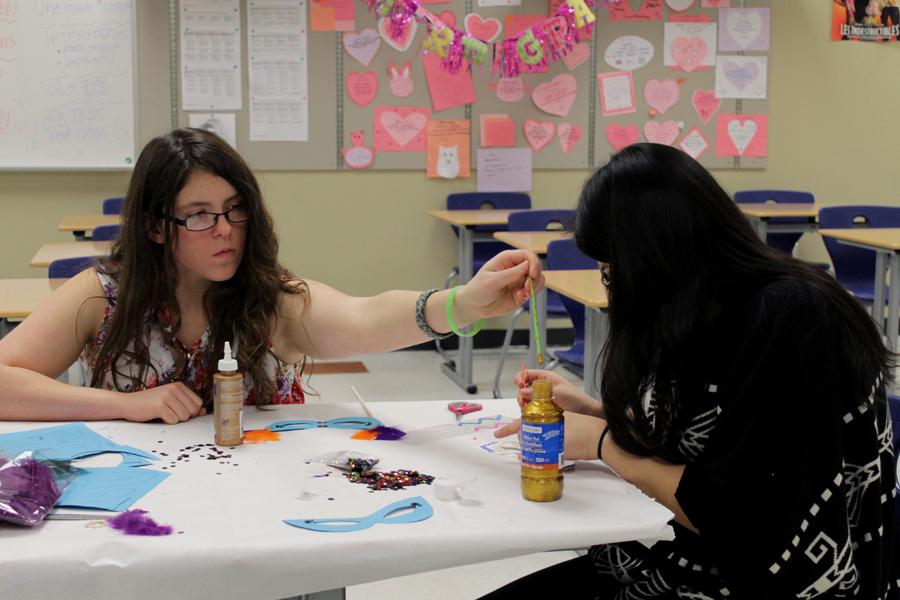 Sarah Diviney (11) and Leslie Lopez (11) concentrate on decorating their Mardi Gras masks. The end of Mardi Gras marked the beginning of the religious fasting, Lent.

Ornate masks have been dubbed as the iconic symbol for Mardi Gras in not only the United States, but also in France. French students had the opportunity to participate in creating a mask on Feb. 16 and Feb. 17.

Mardi Gras marks the beginning of the religious fast, Lent. Because of this, the period before Mardi Gras is celebratory.

“Costume parties [are a traditional Mardi Gras event]. They’re not dressing up in like pumpkins; they are dressing up in costumes we would think of as the Marie Antoinette Era. Certain cities have parades with kings and queens. Traditionally, everything ends on Tuesday [at] midnight. It’s the end of the Mardi Gras season,” Mrs. Nancy Tilka, World Language, said.

Students decorated masks not only at the French club meeting, but also during the Matrix period the next day. By the end of Matrix, students’ hands and desks were donned with glitter and sequins.

“It was cool [to decorate masks] because it was different than what we usually do in French [Matrix]. It was really fun because you got to learn why they wear masks, where it dated back to, the whole culture of it, and it was just nice to work with your friends,” Anna Wachowski (10) said.

The next French Club meeting will be held on Tuesday, March 3. All students are welcome to join.