Fundraising for the Tribe 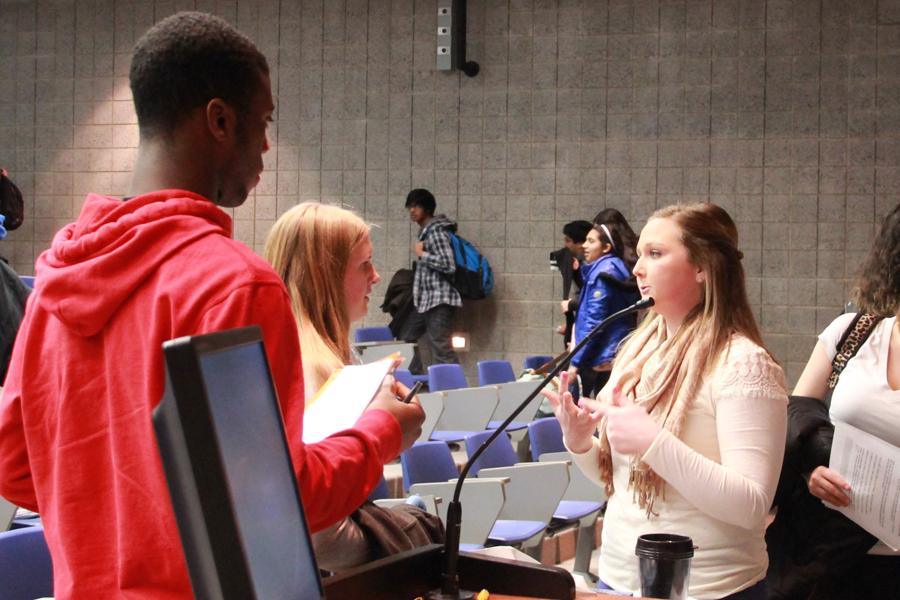 Miss Ashley Kline, Guidance, answers students’ questions after the meeting. During the meeting, she encouraged all of the members to participate in volunteer opportunities.

Dr. Larry Veracco, Superintendent, spoke to club sponsors, coaches and members of Dollars for Scholars on Feb. 18 about a new fundraising opportunity. Members of clubs or sports teams can encourage their supporters to buy bricks for the new Tribe Terrace and make a donation to their group.

“I think it’s a really great idea, and the groups will really benefit from it,” Mrs. Pam Neth, English, said.

Since the cost of pavers was already included in the construction budget, part of the profits generated will go to creating a war memorial and the rest will go to extracurricular groups.

Bhatt joined Dollars for Scholars this year, and she plans to help the group raise money through the brick sale. After Dr. Veracco spoke about the bricks, Dollars for Schools club sponsor, Miss Ashley Kline, Guidance, told the club members about new opportunities, including decorating for the Grand March, applying to be a student Dollars for Scholars board member and volunteer hours.

“I’m doing the Protsman Fun Fair, which is next weekend. I volunteer at the hospital, so I get a lot of hours from there,” Bhatt said.

The next Dollars for Scholars meeting for juniors will take place next month, and the next meeting for all members will be in April.