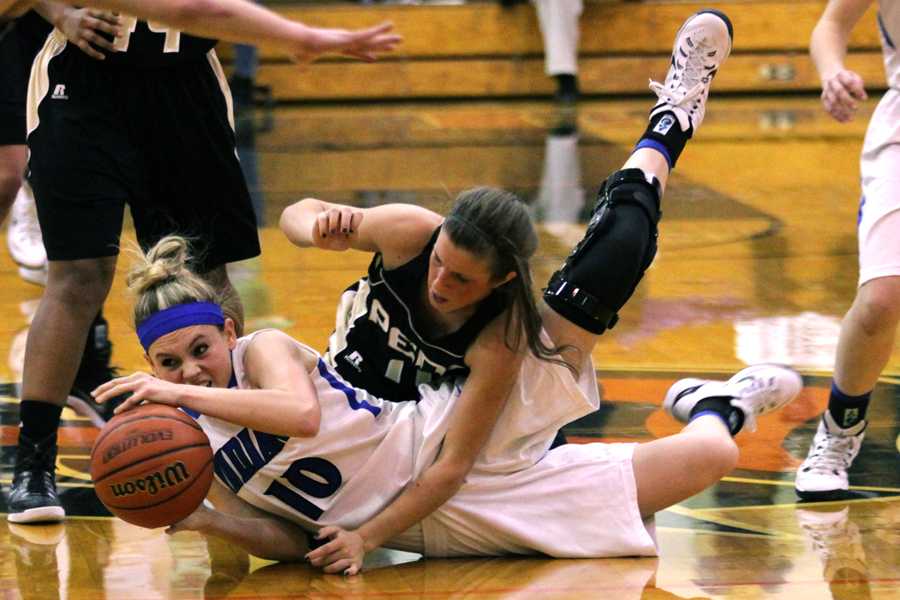 Rachel Bell (11) attempts to pass the ball from the floor of the court. In the first game of Regionals on Saturday, Feb. 21, the Lady Indians beat Penn with a score of 49-45.

For two consecutive years, Penn’s Lady Kingsmen were crowned Regional Champions, but on Saturday, Feb. 21, the varsity girls basketball team brought down the castle with a score of 49-45 in the first game of Regionals at LaPorte High School.

As a standout player, Victoria Gard (11) contributed 11 points, including the two 3-pointers she scored with less than a minute left. Other lead scorers included Tara Zlotkowski (12) with 12 points and Ashley O’Malley (12) and Lindsay Kusbel (12) with 10 points each.

“It was just awesome because I know I was just doing my role for the team, and it just felt really good to help win the game. I think we got pretty much what we expected, and we’re happy because we got the win,” Gard said.

Shortly after Gard made back-to-back threes, each from the far left corner, she was not shy to make an impressive block.

“I saw her getting ready to shoot. I just knew that couldn’t go in, so I put my hand up and hoped for the best,” Gard said.

While O’Malley was one of the four leading scorers, her success was shown through her resilience on the court. After missing two free throws, she was granted a second shot to revive herself.

“It honestly felt fantastic because before I went for one, I looked up at the clock. I knew that this was crucial, and I needed to make them. I was so mad at myself for missing them before, but I knew that I needed to brush it off. Once I hit the first one, it was a relief. When I made both of them, it felt fantastic, but I’m still mad about those other ones,” O’Malley said.

In the third quarter, the Lady Indians scored two points against Penn’s twelve, putting them down by one point at the start of the fourth. Just eight minutes and twenty points later, the girls proved it was possible to stop their opponent.

“We always talk about how we’ll make a run and the other team’s going to make a run, so we knew [the second half] was their run, and we needed to stop it and not let them get ahead. We knew they’re a good defensive team. Even Coach Urban said during practice this week, ‘We’re not going to be able to get a shot off them right away, so if we’re taking time off the clock, it’s OK. Just relax, and we’ll get a shot.’” O’Malley said.