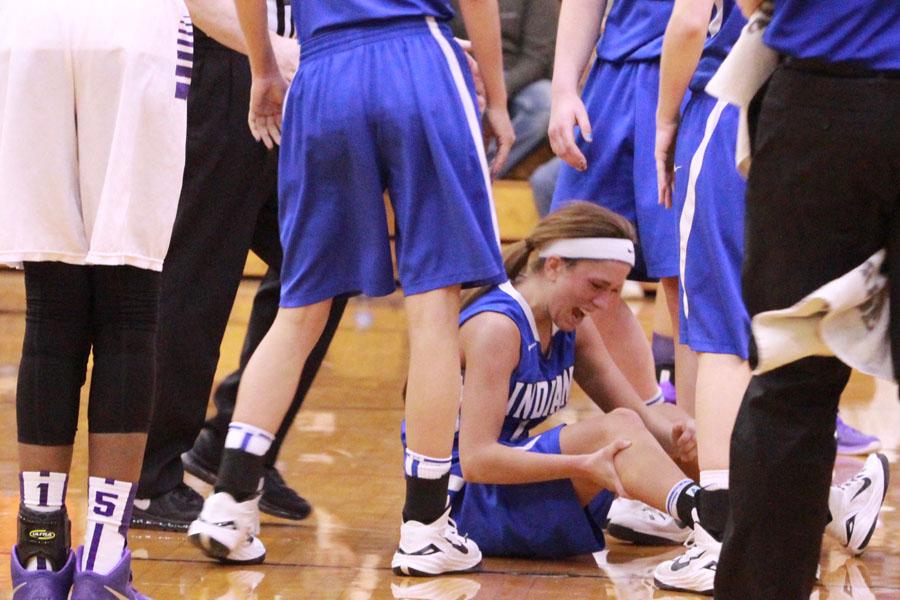 Gina Rubino (12) falls to the ground with a knee injury. Rubino was walked off the court with assistance.

Fans filled the stands of the La Porte High School gym on Saturday Feb. 21, to see the Indians face the Merrillville Pirates in the Regional Championship. The Lady Indians fell to the Pirates 58-49.

“We didn’t get off to a great start, and went down big early, but knew that we were going to make our run just like they did,” Victoria Gard (11) said.

By the end of the first quarter the Lady Indians were down 20-7, but made a comeback in the second quarter with a score of 26-24 Pirates at the half.

“I know we all left all we had on the court.  We played our hearts out, but there’s just nothing you can really do if the shots aren’t falling.  We just couldn’t seem to find the right groove that game to make it happen,” Tara Zlotkowski (12) said.

The score was run up in the fourth quarter by both the Indians and the Pirates. The Tribe fought hard, but the Pirates hung onto the win.

“Personally the first half was kind of rough, I was being face guarded and I was just trying to do what I could for my team. In the fourth quarter when time was running down I just knew we had to score and thankfully my shots had been falling on Saturday, but we just couldn’t hold on for the win,” Gard said.