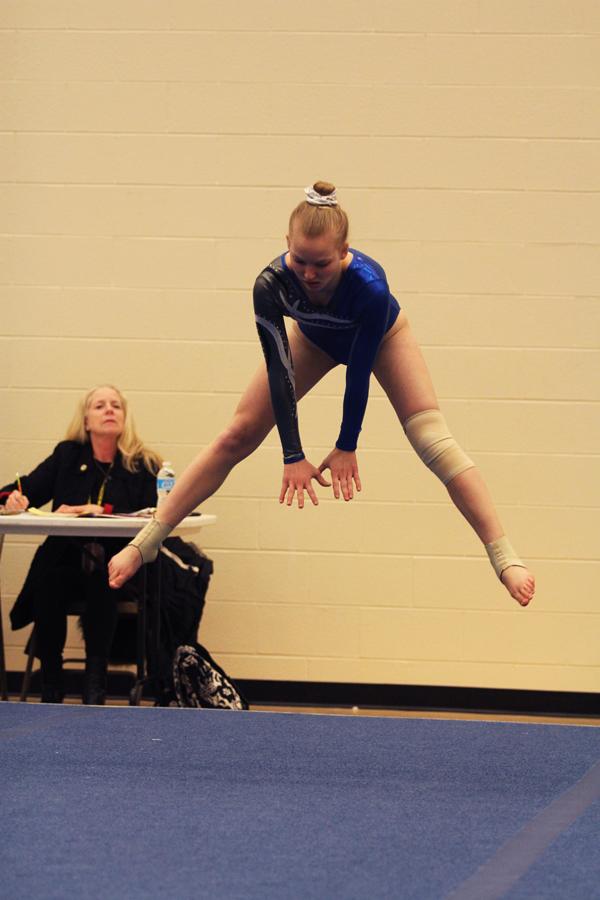 Madison O’Drobinak (9) straddle jumps during her floor routine. The team competed against Hobart on Tues., Feb. 24.

The gymnastics team dominated Hobart on Tuesday, Feb. 24., scoring the team’s highest score of the season, a 96.

“We did well as a team tonight because we all had stuck routines and we all tried our hardest” Megan Gora (11) said.

Several girls on the team celebrated personal records and victories as the meet progressed.

“I feel like I did really well tonight because on bars I got my first 8,” Maya Tobin (10) said.

“I feel like this week is going to be a lot, but we are all going to be really ready for it because we have been preparing really hard,” Tobin said.

“That’s the first beam routine I’ve ever stuck in my career,”  Gora said.

Along with personal victories came some struggles.  Lauren Druzbicki (11) struggled on her beam routine, but pushed through to finish it.

“It’s hard when you know you can do better, and you have done better in the past.  You practice it over and over, but when it comes down to it and you fall, you just need to get back up on the beam and finish your routine,” Druzbicki said.

The victory over Hobart heightened the girls’ spirits going into the rest of the week.

“I think I’ll do much better at the DAC, overall I feel like [the team] will do really well, we have been really improving over the past weeks, months, and over the season,” Druzbicki said.