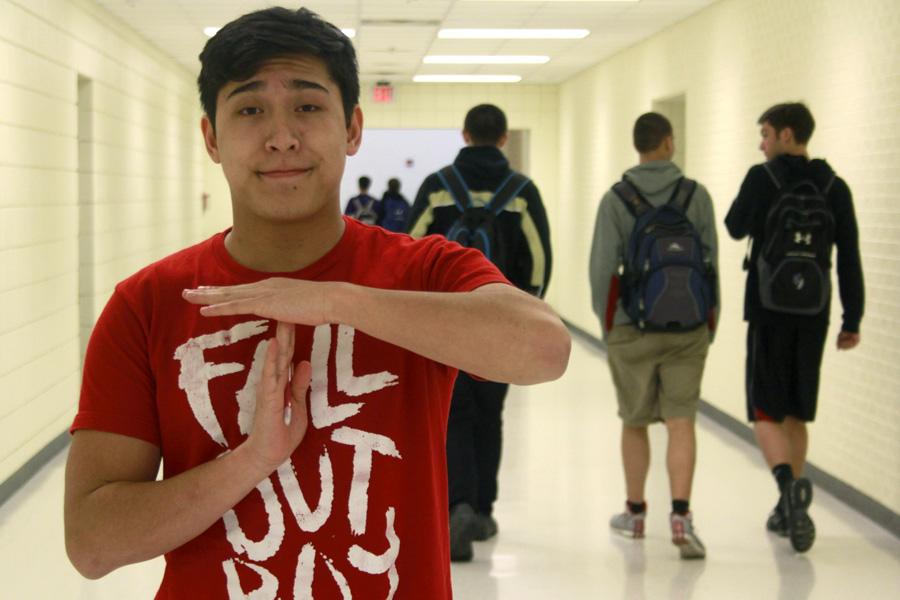 Edward Halbe (11) forms a “T” with his hands, as his poem is about the struggles of being a teenager. Before he presented his poem, he asked the audience to make the same formation whenever they could relate to his words.

Q: What was the event you shared your poem at?

A: “[The event] is called Lethal Poetry. It’s a poetry slam/open mic night that runs every month in Chicago. The main reason I did it was just [because] I wanted to try and get my poetry judged by other people.”

Q: When did you start writing poetry?

A: “I’ve always been pretty good at writing poetry. I’ve always wrote poetry, since like the fourth grade. That’s what got me into the honors system for English in the first place. I couldn’t write journals for school. We had to write a journal everyday, and it was one page. I couldn’t do that, so I just started writing poetry down.”

Q: What was your poem about?

A: “I wrote it as a poem directly for teenagers. It was about teenagers, struggles [and] how we feel that we’re treated lower.”

Q: How do you feel about your performance?

A: “I was really nervous. When you’re at a poetry slam, they’re supposed to judge you for how well the poem is written, not how well you perform it. I got some points taken off because I was very nervous at the start of my poem, but as time went on throughout the poem, I got better. At the start, I talked too fast, [and] I slurred my words.”

Q: How was the experience for you?

A: “The experience was really nice. I went with Rachel [Yorek (11)] and Sean Harper (11). It was good. [There weren’t] that many people, about 40-50 people max, so everyone was pretty nice. It was open. You could talk about anything you want. Some people talk about sensitive [topics]. Some of it was funny. It was overall just really nice.”

Q: Was this the first time you shared your writing before a crowd?

A: [This was] the first time openly at something big like this. I’ve done Open Mic Night at like Sip [and] other coffee places, but this was the first actual just poetry thing that I’ve done.”

Q: Why do you think it’s important for teenagers to share their voice?

A: “I think it’s important for those of us that don’t usually stand out. Some people have outlets like sports and everything. I no longer can use sports because of my knee surgery, so this is where I’ve been putting a lot of my effort in. I think it’s important because everyone has to have that outlet in way to communicate and outspeak.Either if you’re outspeaking your anger in sports, writing, painting or whatever, as long as someone has a way to channel that in less destructive ways, it’s good.”

For those interested, here is a copy of the poem Halbe wrote:

This is for those of us who gain as much respect, as Malcolm in the middle.

Those of us who live due date to due date in hopes for a job where we can start to live paycheck to paycheck.

And finally for those of us who wanted to just go out and enjoy ourselves, but got sent back to our rooms by our mothers.

It is for those of us at a point where we are to choose what to do with our lives, but can not choose when to go to the restroom.

It is for those of us at a point where we are believed to be like adults, but not have our opinions and ideals believed simply since we are too young.

It is for those of us at a point where we are able to talk and write in a new and creative way, but not have been able to write in anything but Times New Roman 12. Point, Font.

We are white crayons in the new box.

We are the unglazed doughnuts left in the box.

That T is not just for teenage, but also for being number two.

Just like this choice for hands signs, since V was already taken by the Trekkies!

No but for those of us who thought back to William Shatner , do not fret.

Your life isn’t much different from ours.

Your mother is simply your boss and she is forcing you right back to your room.

So go get back to your little cubie to do the crap mom has dropped down in front of you.

She is only doing it out of love, and in hope of a paycheck.

All she wants to do is get rid of the crap her mother pushed down on her.

It goes up and up the ladder until we reach Grandmother Alpha Almighty.

She is old and sitting on top, and she knows the crap that she has falling down the ladder will be picked up by someone.  She knows she is far too old for this, but she also knows everyone else will clean it up. Grandma can be seen with her devilish little smile.

This T is not only for us number Twos on the ladders, or for teenagers trying to climb up it.

This T is for Treatment.

It is for how we feel like the crap we are cleaning up for others.

We are the guys at the back of the parade cleaning up the crap from the animals.

No it does not matter if the this T is for treatment.

This T can be for teenager, two, treatment, time, taco, or tyrannosaurus-rex.

It is only a symbol.

It only shows what we feel, but now look at the others.

We all held the T.

We all felt one of the Ts.

We are not alone in this world holding only our T to our side, cuddling it under the covers scared of tomorrow.

No. This T does so much,

This T brings us Together.