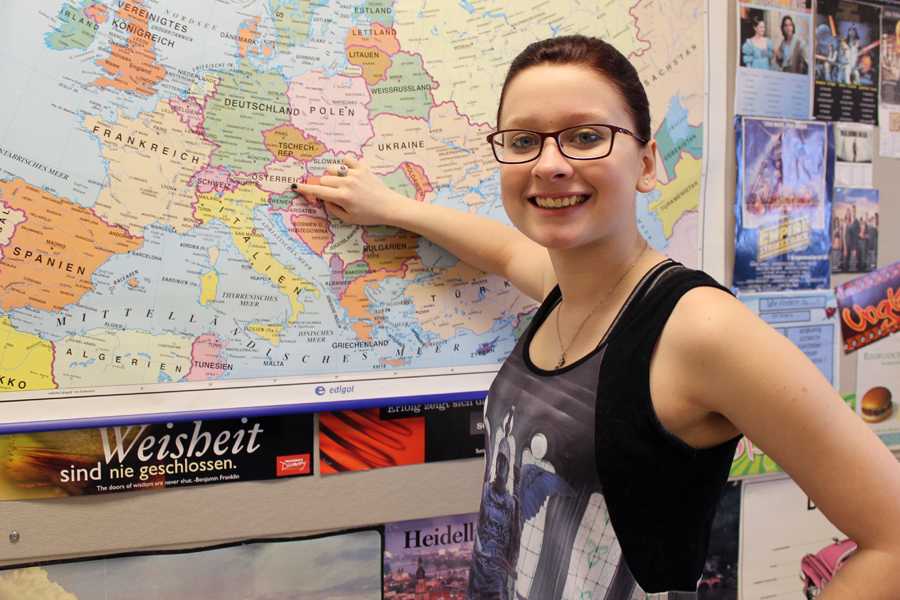 Emily Hansen (11) points to the city in Austria where she will be traveling to. Hansen had to leave all of her communication devices at home in order to go on her journey.

Q: What is the trip you are going on for?

A: “[The trip] is called Total Emergen. I’m going to Austria, and I am not allowed to speak, hear or read English at all. I’m leaving my phone and laptop [at home] because anything that has English or internet connection is out of the deal. I can’t use it. I will be there for five and a half weeks, and I will only be able to speak German. I have a host family that I will be staying with and going through their daily lives.”

Q: What organization funds this program?

Q: How did you apply?

A: “I have been interested in it before, so a teacher mentioned it to me. All I had to do was sign up for a test, and it was a college-level German test. I took the test, and since I passed, I was allowed to apply. I applied, waited a couple of months for them to tell me if my application was accepted or not, [and] then I had to do an interview. After the interview, I was told that I was in. It’s a long process, but it’s worth it.”

Q: What are you looking forward to?

A: “There’s a lot. I’m going to a city in Austria called Graz, and some of the streets look like Disney World. It has been my dream to go. Since I was a kid, I wanted to go somewhere where they spoke German, and now that I know enough German, I can go.”

Q: What do you think you will get out of this experience?

A: “I want to be mostly fluent [in German].  I also want to make friends when I’m [in Austria]. I have already decided that if I get along with my host family, then I’ll stay in contact with them even when I leave.”

Q: What do you want to say to people who are thinking of going?

A: “If you have the chance to study abroad do it because you might not get the chance later in life.”