JV girls softball does not fool around 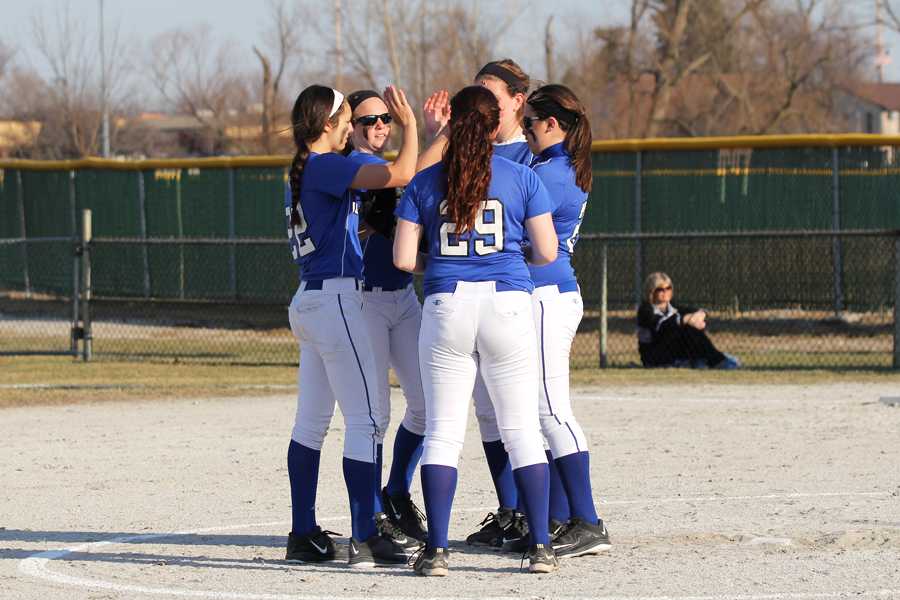 Rylee Platusic (9), Jessi Kiefor (9), Selena Michko (9), Alexa Pinarski (9) and Sydney Dinan (9) go in for a group high-five to congratulate each other on another run. The team won by a landslide with a final score of 12-1.

With the new weather rolling in, comes the brand new season for the JV girls Softball team.  They started off their season right with 12-1 win against Penn High School on Wednesday, April 1.

“I thought [winning the game] was pretty awesome because usually [Penn is] a pretty good team and, you know, slaughtering them by that much was pretty cool,” Alyssa Ranieri (10) said.

For some, playing one of their first games against the Penn Kingsman was a bit intimidating going in.

“We didn’t really know much about them so it was kind of [nerve-wracking at first], but once we saw them warming up, we felt pretty confident,” Jessi Kiefor (9) said.

The girls have been leading up to this moment for a few months now, preparing themselves for challenges that come with school sports.

“We do a lot of base running because that’s what we want to focus on. Then, we go through a bunch of plays and just routine ground-ball and pop-ups,” Kiefor said.

Though the Lady Indians can rest-easy about their first game of the season, there’s still a lot to look forward to concerning upcoming games.

You can catch the girls’ next game on Friday, April 3, at 4:30 against Highland.