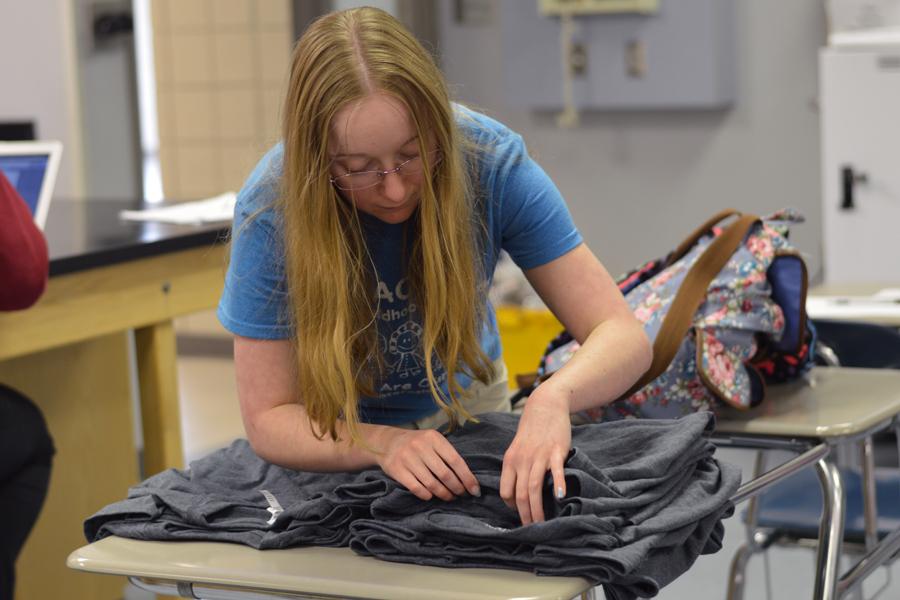 Ashley Millette (12) counts the number of shirts that were sold. The club sold the shirts to honor Earth Day.

Environmental Club is just one of the many after-school clubs Lake Central students can participate in. This club strives to teach different ways to develop a greener daily routine.

“[We teach] how to be more green, and the little things we can all do to be more environmentally friendly. Regardless of the impact you think you’re making [by being more green], even if its something small, you’re making a difference,” Ariana Bulette (12) said.

This club is sponsored by Mrs. Jackie Ruiz, science, and Mrs. Julie Shupryt, science. The club was first established in 2010, and from there the club has educated Lake Central students and staff on how to be environment-friendly.

“Back in 2010, I had a student that came to me that wanted to start a club, but he needed a club sponsor. Being the only teacher that taught Environmental Science, he came to me and asked me to be his sponsor, and from there this just took off. The students themselves talk about it and come back every year and ask if I can sponsor again. I really am just their voice through the class, and the students take over when it comes to what they want to do and what kind of projects they plan to do for the club,” Mrs. Ruiz said.

Like any other club, Environmental Club is always looking for people who are eager to help make a difference in our school.

“I think people should join because this is our only planet. It’s not like we’re going to wake up one day and be like, “Hey look, there’s another Earth. Let’s go to that one,” No, this is our only planet. We have to take care of it because if we don’t, it will have detrimental effects that are going to affect not only humans, but plants, animals and everything on the planet. It’s really taking a step and saying, “Hey, it’s not just humans that matter, it’s the plants and animals too” because we all make up this earth,” Ashley Millette (12) said.