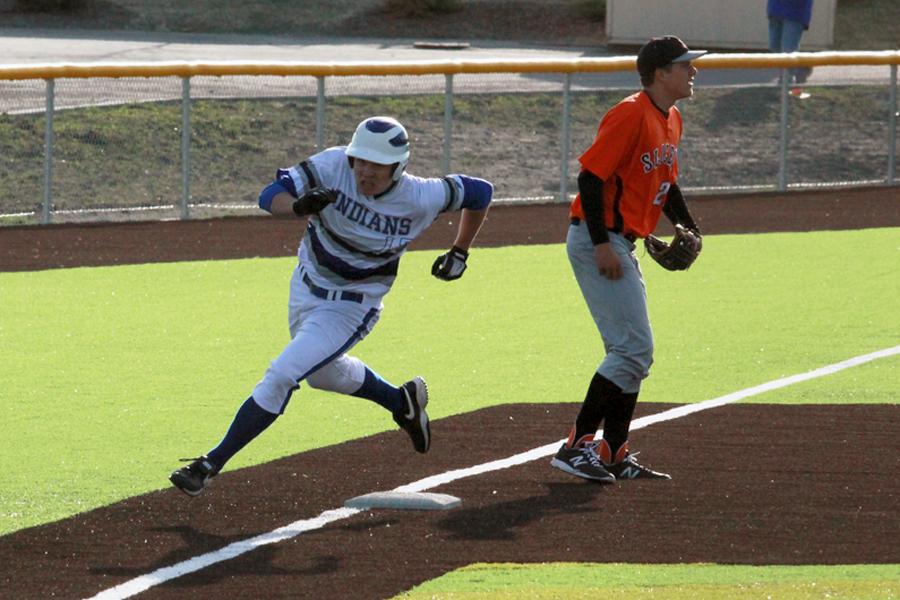 Zachary Turnbough (11) rounds third base hard and heads home in the game against LaPorte. Turnbough scored off of a double hit by Alexander Nisle (12).

The varsity baseball team played a close game against the LaPorte Slicers on Tuesday, April 28. The Indians played nine innings total, finishing off with a score of 5-4 in favor of LaPorte.

Joseph Graziano (10) pitched the first five innings and was followed by Bryan Vanderlee (12) for the last four.

“I did decent. I had two runs in five innings. It’s not too bad, but I could have done better. It’s only two runs, but I should have given up zero,” Graziano said.

The Indians were leading 3-1 in the fourth inning, but the score was tied 4-4 by the sixth.

“We played a pretty good game. They played good. [They’re] just a good baseball team. There were a few mistakes here and there that kind of cost us, but that’s just how it goes,” Graziano said.

The Indians will face off next against Chesterton at home Thursday, April 29. The boys will use this tough loss to prepare for the next game.

“We will take the positives out of this game, put them into the next one and fix the little mistakes that cost us games. A little mistake here and there is what makes us lose. If you play a good team you can’t make little mistakes, or it will cost you the game like it did [for us],” Graziano said.