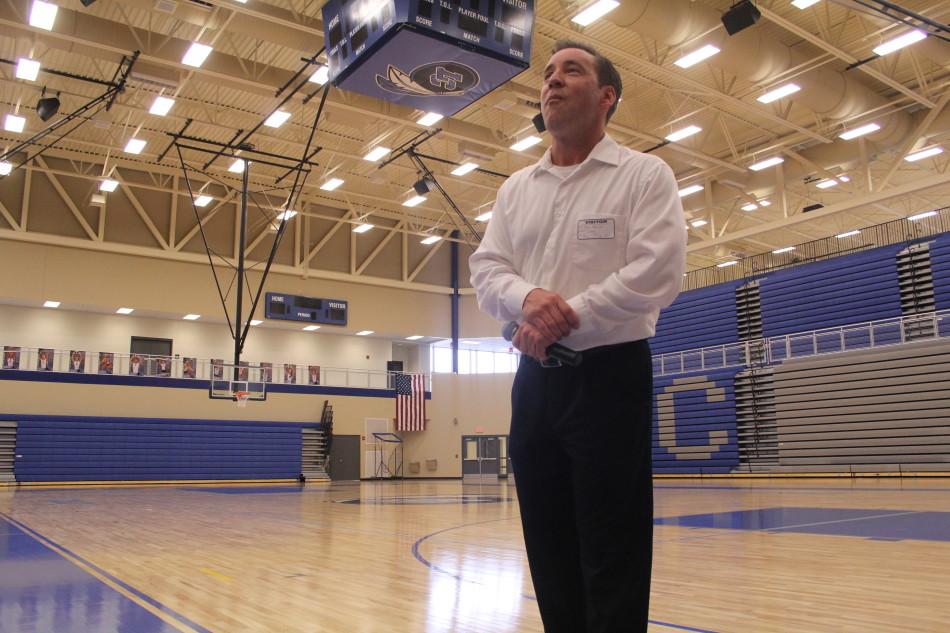 Mr. Don Bacso, school board president, explains to the students why he is sharing his story with them. The students asked many questions at the end of the program.

“It was strictly business. My hotel was about three and a half blocks away. I remember how I needed to catch up on some software, so I called another worker, Chuck, and I had him give me a key card so I could check in early the next morning,” Mr. Bacso said.

Mr. Bacso mentioned how he usually arrived around 9:30 a.m., meaning that he would have missed the attack all together if he had gone to work at his regularly-scheduled time.

“I got to the building at 7:45 a.m. I went up the elevator to the 44th level, then took an additional elevator to the 57th floor. At 8:46 a.m., 10,000 gallons of jet fuel struck the building. It was loud, really loud. Then we started to feel the building sway. It swayed about 10 feet north [and] then swayed 10 feet east. The plane started falling through each level, slowly but surely. The whole floor was shaking. I go over to this man’s cubicle next to a window. He and a few others were pressed up against the window watching all the black debris fall everywhere,” Mr. Bacso said.

Almost everyone on that floor had made his or her way down the staircases. The receptionist on line four had unfortunately not been able to make it out in time.

“I made it out of the building, but I remember looking and seeing the huge amounts of debris and the explosion. I went back to my hotel with two other women. We had to pull people into the hotel because of the thick debris that was everywhere. I remember me and this other guy had to pull this woman in. She was crying, and all we could do was put her over the garbage as she threw up and tell her it was [going to] be OK,” Mr. Bacso said.

Mr. Thomas Clark, Social Studies, asked why Mr. Basco came here and spent time educating students about the event. The oldest a student could be at that time was five years old.

“I want you guys to carry this. The people that died don’t have a voice. That is why I’m asking you never to forget,” Mr. Bacso said.