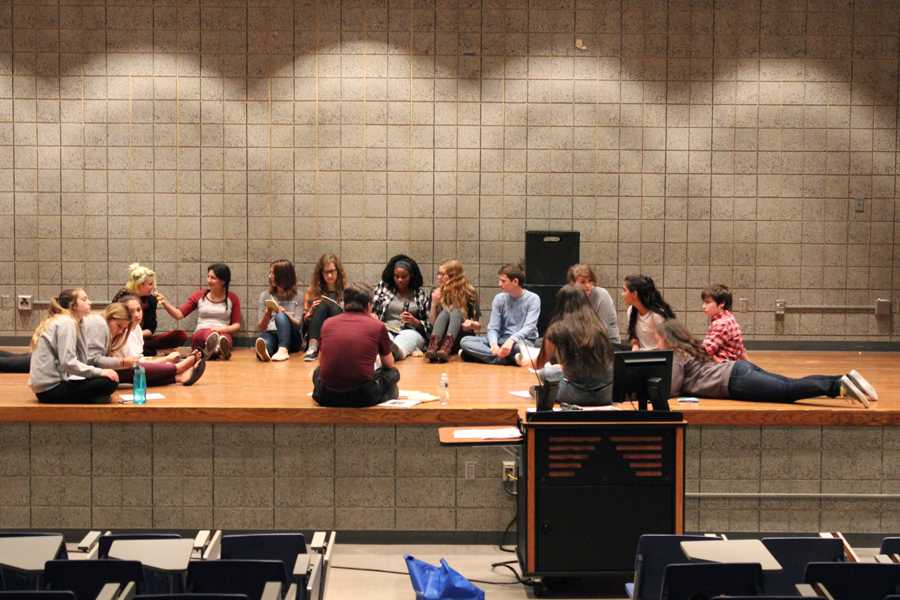 The cast of Every Seventeen Minutes the Crowd Goes Crazy gathers on the stage in the LGI room after school. They were being handed scripts and papers about the show.

On Wednesday, Sept. 16 at 2:30 p.m., the cast of Lake Central Theater Company’s contest show, Every Seventeen Minutes the Crowd Goes Crazy by Paul Zindel, gathered in the LGI room to do a read through of the show.

“The show is about a group of siblings whose parents have left them to go bet on the horses at the racetrack. [They] decided to abandon them completely and never come home. The kids are forced to try to raise themselves,” Mr. Ray Palasz, English, said.

This year’s contest show is different from what the Lake Central Theater Company usually performs.

“[I chose to do this show because] it deals with the idea of parenting and families. I thought it was a timely piece to do. It’s a little more challenging [because] it’s a social issue play, which is something we haven’t done much of. It gives our actors a chance to tackle something that’s a lot more challenging for them, emotionally,” Mr. Palasz said.

Before doing the read through, cast members discussed the script and were given character assignments to do to help develop their characters.

“I’m really excited. This will be my first time [being in a dramatic show].  It will be fun to try. I really enjoy my character. I have a lot of lines, and there are a lot of [emotions] behind the character. I think [my character Wendy] is cool,” Sophia Bockstiegel (10) said.
The cast of Every Seventeen Minutes the Crowd Goes Crazy will perform in Lake Central’s LGI room on Nov. 11 and 12, at the regional conference at Bethel College on Nov. 21. If selected to advance, they will later perform at the state conference at Vincennes University on Jan. 22.