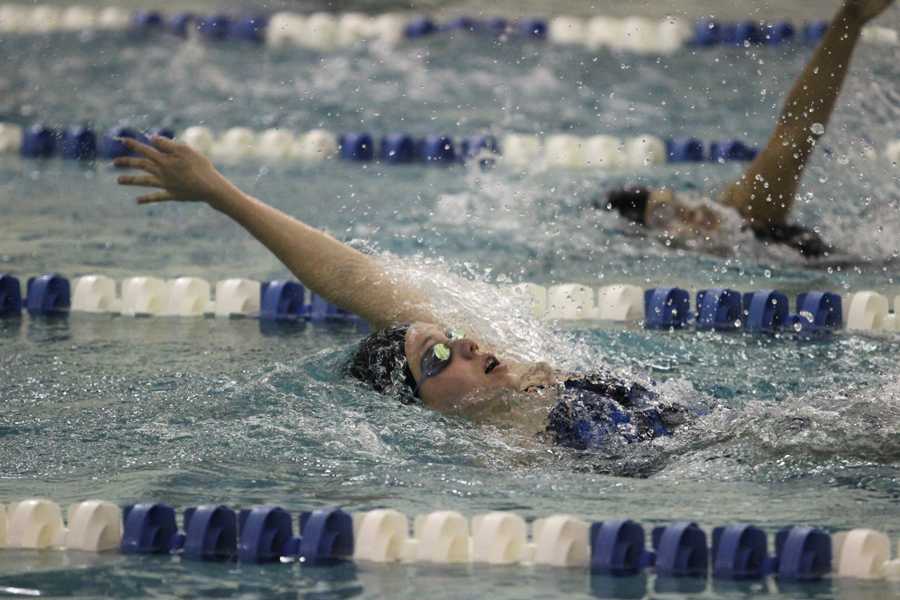 Jillian Murray (9) competes in the 100 backstroke. Murray won the race.

On Tuesday Nov. 24, the varsity girls swim team had their first meet against the Portage Indians. Lake Central took the win later that night with a score of 112-71.

The swimmers and coaches came in strong for the first meet of the season.

“I think it’s going to be a good season, we’re a young team, but we’ve been practicing well. The first meets are exciting, getting in the water and seeing where we’re at right now, because we’ve been training pretty hard,” Coach Todd Smolinski, Social Studies, said.

With intense practices in the morning and afternoon, the girls are glad to start seeing results in the water.

“Based on my times right now and how much I’ve improved already, I think that by the end of the season that I’ll be doing really well,” Mia Rinaldi (9) said.

The girls are setting their goals high this season with trying to be the best swim team in the region. As of now, Lake Central is placed fifth overall in girls swimming.

The varsity girls’ next meet is Dec. 1 against the Valparaiso Vikings in the Lake Central Natatorium.