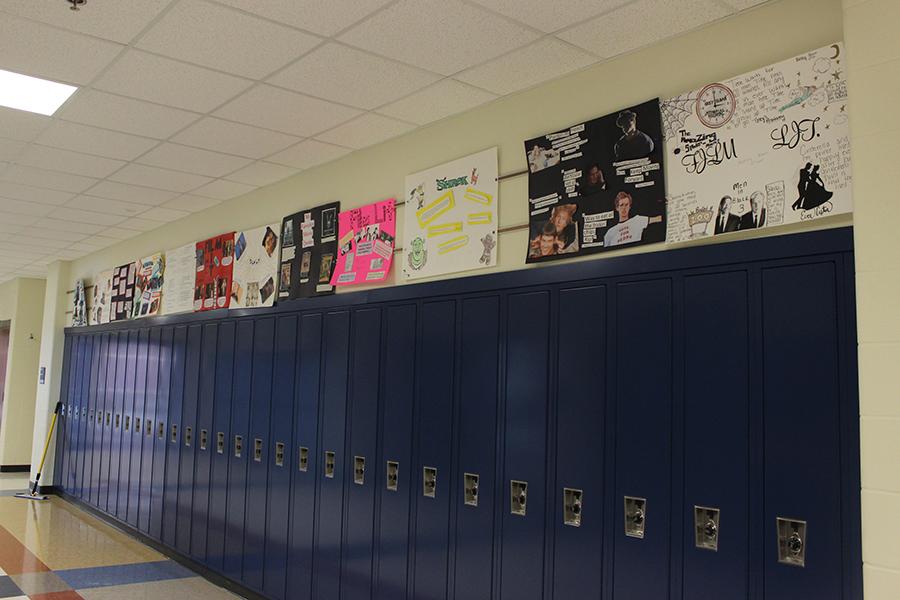 The film literature students finish their quote posters for the class. They were hung up in the hallway for everybody to see.

Q: What is the film literature class based on?

A: I try to let the students see movies that you should see at some point in your life, like today we are going to watch an Alfred Hitchcock movie. I feel like everybody should watch Hitchcock at some point in their lives. I try to go over different film concepts that students would need to know, like different camera angles and what that means, also different editing techniques and cinematography. We watch movies to give examples of those film techniques essentially. We [also] read a few books.

Q: How many film literature classes do you have this year?

A: [I have] only one [class] this semester, and I’ll have one next semester too. Last year, I had two each semester.

Q: What’s your favorite thing about teaching the class?

A: That’s difficult [to say]. One of my favorite things is the fact that most of the students in the class want to be in the class because it’s an elective, so they actually choose it. Something else I really like about the class is the fact that it allows students the chance to analyze a visual medium. I think so much of our world is trying to analyze advertisements and what we read on the internet, see on TV and in movies, and I think this class gives students the opportunity to start to practice that so that when they go out in the world they can be better consumers of information.

Q: Would you recommend this class to someone who wants to go into film?

A: Definitely. I think a lot of the things I cover in the class would be covered in an intro to film study class in a college, again, camera angles and lighting and stuff like that. I think, if nothing else, it would be a good precursor to a class like that.

Q: Do you do any projects in the class?

A: We do two [projects]. We do one per quarter because it’s only a semester class. The first quarter we do a quotes poster project, so the students have to come up with at least five of their favorite quotes and then put it on a poster. We hang them up in the hallway. Then, the second quarter, it’s a little more involved. We do a movie project, so the students actually have to make their own movies to practice some of the techniques they learned in the class.

Q: What grade level do you recommend taking the class?

A: [I recommend this class to] juniors and seniors only. A lot of the movies we watch are rated R, so I wouldn’t recommend it to anyone under the age of 16. We get parental permission before we show anything.