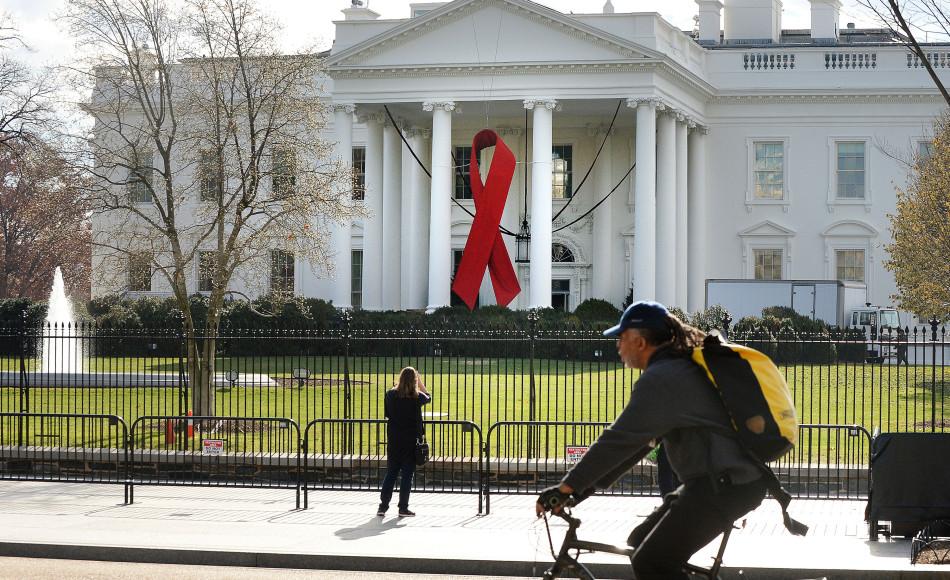 A red ribbon is displayed on the North Portico of the White House on Dec. 1, 2014, to commemorate World AIDS Day in Washington, D.C. Photo used with limited license: Olivier Douliery/Abaca Press/TNS

World AIDS Day is held on Dec. 1 each year. Since its creation in 1988, World AIDS Day helps spread awareness and show support for those infected with the HIV virus.

HIV, also known as the human immunodeficiency virus, is a virus that gradually attacks the immune system, which helps protect our body against illness. There are many different types of HIV, but they are classified into two main groups. Both types, HIV-1 and HIV-2, cause similar infections and can both lead to AIDS. However, HIV-2 is much milder and less infectious. HIV-1 is more common worldwide while HIV-2 is more common in Western Africa. AIDS, also known as acquired immune deficiency syndrome, is the last stage of the HIV infection. AIDS is a syndrome when a person’s immune system is too weak to fight off many infections and diseases and can lead to death. There is no cure for HIV or AIDS, but with proper treatment those infected with the disease can live a full life.

“[I haven’t worked with AIDS] as a nurse but I was a surgical technician and during that time [I worked with AIDS]. We always used double gloves and the gloves were always thicker if we knew that the patient had HIV or AIDS. Normally, the surgical technician passes the instrument to the surgeon and there was no passing when the patient was infected. The surgeon grabbed it from the tray and then he would use it and put it back himself,” Mrs. Carla VanDerNood, R.N. said.

The HIV infection can live in bodily fluids of an infected person. Some of these bodily fluids include: blood, semen, vaginal fluids, breast milk and rectal fluids. To be infected, these bodily fluids need to get into your blood through a mucous membrane, breaks in the skin or be directly injected into the bloodstream. The most common ways to get HIV are through unprotected sex, injecting drugs, mother-to-baby transfer during pregnancy, childbirth and breastfeeding, working in healthcare, blood transfusions and organ and tissue transplants.

“Obviously, [HIV/AIDS] is not transferred through saliva, but you can keep any open wounds covered as the best way of prevention. Also protect yourself during sex,” VanDerNood said.

According to the Center for Disease Control, “An estimated 36.9 million people are living with HIV/AIDS worldwide. Global efforts have resulted in approximately 13.5 million persons in low-income and middle-income countries receiving antiretroviral therapy (ART) for HIV infection in 2014, an increase from 2013. Globally, more than 15 million people are on ART. New HIV infections have fallen 35 percent since 2000, with 66 percent of the 2 million new HIV infections occurring in sub-Saharan African countries, where women account for more than half the total number of those living with HIV.”

The 2015 theme for World AIDS Day in the U.S. is “The Time to Act Is Now.” Globally, the theme is “Getting to zero; end AIDS by 2030,” which calls people to act quickly to try and use HIV prevention strategies to end AIDS in the near future.