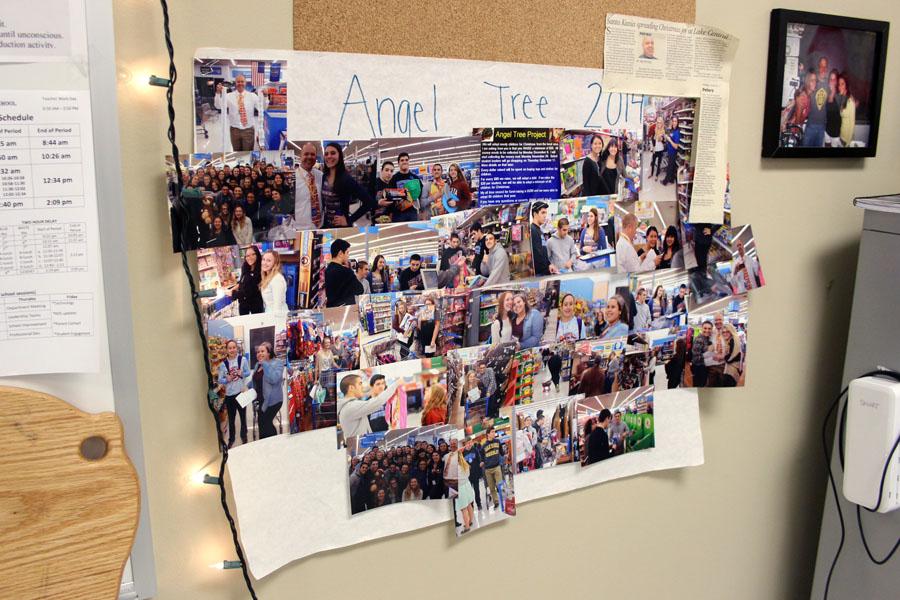 A collage from last year’s angel tree project hangs in Mr. Robert Kania’s, Science, classroom, along with an article written by Jim Peters from the NWI Times. Mr. Kania has made angel tree memories as early as his senior year in high school.

Q: How did you get involved with the angel tree project?

A: I did this project as a senior in high school with my English class. We adopted a family of four. We bought all the presents, wrapped all the presents [and] got in trouble in Wal-Mart for playing football in the aisleways, and I just loved it. I remember who my partners were, who my group was [and] I remember what gifts we got them. I just thought it was awesome. My parents run a similar program that [the] Salvation Army does in South Bend, so they’ve done this for years. When I became a teacher, my first couple years I was just worried about teaching, but then I wanted to start finding out a different way to get involved and have kids get involved in different ways as well. I think this is my 11th time doing this project as a teacher now.

Q: What made you want to carry on this project in your classroom?

A: I get to see kids in a whole different light. Being a chemistry and physics teacher, you either like my class or you hate my class, but yet people get involved in this that aren’t involved in my class. It immediately puts an impression on my brain, but more importantly, it just let’s me see them. Maybe they’re not that good in math [or] physics, and chemistry isn’t the best, but this lets them shine in a different way to me. I like that a lot.

Q: What are your goals for this year’s project?

A: My goal for this year was to take care of every angel from Dyer, just like we did last year, however many [there are]. We tried to take more angels this year, and hopefully we get more. Whatever other money we have left over lets us take care of the Salvation Army Angel Tree Program. My initial financial goal was $10,000. I set that up for Student Council, as [a] goal that each [member raises] $100 for service hours and things like that. That way we can hit that goal without a problem, knowing full well that not everyone was going to do that. It’s just part of what it is, so I opened it to my classes. My initial goal for each class was $500. If every kid raised $20, even if they’re not in Student Council, my class would raise that goal. All but one [class] has hit that so far. [My third hour] has raised over $1,200. You have to have what I call heavy hitters. In order for this to be successful, you have to have the kids [who] come through with an insane amount of money that you just never thought possible. As weird as that sounds, I also appreciate the kid who just gave me $10. That might be the only $10 they had. I just want to see them branch out and care about something besides just themselves for even a couple minutes.

Q: How have students been raising money?

A: People do different things. One of my girls in Chemistry volunteered to clean her grandma’s house top to bottom, and [then] she [said], ‘You don’t understand what kind of undertaking that is because she hasn’t cleaned it in like three years.’ For some kids, I’m sure their parents just wrote them a check. That’s fine, but for Student Council, I really wanted to set it up as a service. I really wanted [students] to try to do something, like rake leaves or babysit or something that is a service project.

Q: What would you say to others to encourage them to donate?

A: One of the things I try to sell these guys on is this may be the only time [the kids] get picked [off the angel tree]. I remember a couple years ago, when I did this at Portage, we went and we took what we thought we could take off of their tree and their program was ending in two days. We took like 20 kids off the tree.There [were] still like 15 kids left on the tree, and I [was] sitting there saying, ‘OK they’ve got two days left. They’ve been doing this for two months now, and they still have 15 kids on this tree.’ My entire sentiment is I don’t want any kids left on the tree. That’s actually how I sold it to that group of kids that I had that year, and I was able to go back two days later. The same 15 kids were still on that tree, and I cleaned the tree. We took them all. We even had so much money that we went to the local church, and we cleaned their tree. We raised about $3,500, and for what we budgeted, we ended up taking care of about 45 kids. We cleaned off one tree and cleaned off another tree. I was just ecstatic because I didn’t want anyone else left without a Christmas.

Q: Do you have any angel tree memories that really stand out to you?

A: I had a kid one time. He was a horrible kid, always mean to me in class, never really did his homework [and] never tried. He came and brought me his paycheck. He brought me $350, and I said, ‘Are you sure you want to give me this much money?’ and he said, ‘One year I didn’t get a Christmas, and I don’t want any kid to have that again.’ Really that was the turning point. I’m not saying he turned into a genius overnight, but he was a lot better in my class. He tried, and he did stuff. It was just like that was the kick he needed to be better.